Imagine a life without pain. No throbbing headaches. No stinging sunburns. No aching joints. If you think that sounds great, think again.

Some people can’t feel pain. They’re born that way. They also tend to die young — unlike, say, people who cannot see or hear, notes Luda Diatchenko. “Pain is much more important for survival,” explains the pain researcher at McGill University in Montreal, Canada.

Pain protects us. When you touch a hot stove, you recoil in pain. That sensation helps you avoid getting a burn that could be dangerous — even deadly. The throbbing of a broken foot tells you to stay off it until it heals, so you don’t do more damage. Without those signals, we’d all be in trouble. Big trouble.

Some pain is straightforward. Burn your skin, pull a muscle or break a bone, and you feel discomfort. This short-term effect is called acute pain. Other pain can last months or years. Called chronic pain, its cause often remains a mystery. In fact, “sometimes the nervous system can get it wrong,” says Steve Prescott. “You have pain that shouldn’t be there,” explains this pain researcher at the University of Toronto, Canada, and the local Hospital for Sick Children.

Scientists are still working out the different causes of pain, and the best treatment for each type. The biology of pain is complex. But the good news: Researchers are learning more about it every day.

When you suffer an injury, your nervous system is in charge of delivering the news. Imagine that you twist your ankle. Nerve cells in your ankle pick up the signal that something’s wrong. A network of nerve cells relays this message to the spinal cord. From there, it shoots up to the brain. The brain then translates the message and registers the feeling: Ow!

That’s the simple explanation, at least. There are still a lot of questions about how those messages travel and how the brain turns them into a “feeling.” Piece by piece, scientists are starting to understand how this complicated system works.

In recent years, researchers have found receptors for different kinds of pain. A receptor is a special protein on a cell. Its job is to pick up signals arriving at the outside of the cell. A receptor called TrpV1, for example, is found on nerve cells.

TrpV1 detects signals about painful heat. It does that in a couple of ways. For starters, the receptor seems to react to heat itself. That’s not totally surprising as heat also changes the shape of certain compounds in the body. (A compound is a substance formed from two or more chemical elements bound together in a fixed proportion.)

TrpV1 can detect those altered compounds. When you accidentally touch a hot stove, TrpV1 snaps into action. It takes the too-hot-to-handle message and sends it to the brain. Interestingly, that same receptor also detects the chemical compounds that make spicy chili peppers taste so uncomfortably hot.

The search for receptors has become a hot area for scientists too, says Prescott. However, he notes, research hasn’t answered the important question of how those messages are converted to what you actually feel when you experience pain.

Answering that question could help a lot of people. In the United States alone, more than 100 million Americans suffer from chronic pain, according to the Institute of Medicine. This U.S. health organization is part of the National Academy of Sciences.

In some cases, doctors know the cause of chronic pain. Inflammation is a common one. Inflammation is one way that the body responds to cellular injury. Beyond pain, it often triggers swelling, redness and heat. Arthritis, for example, is a disease that causes painful inflammation in the joints. The nerves themselves represent a second source of pain. Diabetes is a disease that can damage the nerves in the hands and feet. That damage leads to pain, tingling and numbness. Drugs used to treat cancer also can cause painful nerve damage.

Many other chronic pain disorders, however, have no easy explanation. Take migraines. These intense headaches aren’t caused by inflammation or injury. They aren’t linked to nerve damage, either.

For a long time, experts thought of migraines and other episodes of chronic pain as symptoms of another problem, says Theodore Price. He is a pain researcher at the University of Texas at Dallas. More recently, pain researchers have changed their way of thinking. Now, Price says, many scientists believe that chronic pain occurs when the nervous system itself gets broken.

Brain cells are surprisingly flexible. When you make new memories or learn something new, your brain cells actually alter shape. “When you learn a math equation, the structure of your brain is literally changing,” Price says.

It turns out that the same systems involved in learning and memory also are involved in sensing pain. In other words, pain changes nerve cells. Those changes happen both in the brain and in the spinal cord. And they may last even after the initial trigger for pain vanishes. Price calls this a kind of “pain memory.”

He and other scientists are trying to figure out whether they can reverse those changes. If they could wipe out the “pain memory” stamped onto the cells, maybe they could cure chronic pain. To do so, they’ve tested some drugs that interfere with molecules that transmit messages in the brain. (Molecules are the smallest units of chemical compounds that take part in chemical reactions.) The drugs are newly designed compounds that have not been tested yet in people. They did, though, seem to erase pain memory in mice and rats in Price’s experiments.

But there remains a worry. Messing with brain cells could have unplanned side effects. “You don’t want to wipe out people’s memories or change who they are,” Price explains. Before he and his colleagues can test their new approach in people, a lot more work will be needed to make sure it’s safe.

In Toronto, Prescott is working to understand what might go wrong with the nervous system to unleash chronic pain. Part of his research involves figuring out how pain messages travel through the body.

Some scientists have suggested there are special networks for pain. Such a “circuit” of nerve cells would have only one job: transmit ouch signals. Other experts think pain just borrows the same circuits that relay messages about non-painful sensations. If that second theory is correct, the same network of cells that tells you a cat’s fur feels soft also might tell you that a scratch from its claws really hurts.

Prescott thinks the second theory is the right one. One clue that it’s right comes from an old illusion, called the thermal grill.

Just as optical illusions fool the eye, sensory illusions can trick the body into feeling imaginary pain. The thermal grill is made up of metal bars set to different temperatures. The bars alternate: cool, warm, cool, warm. If you touch a single bar, it will feel either cool or warm. But place your hand over the whole grill at once, and it will feel painfully hot. In this way, Prescott says, “You can trick the nervous system into feeling pain.”

Then again, a confused nervous system may be only one explanation. “Pain is an extremely complex phenomenon,” says Diatchenko. “It can be broken in many different ways.”

Pain is complicated for lots of reasons. For one thing, there are many different types of pain — a muscle ache is very different from a pinch or a burn. Plus, some people are more sensitive to pain than others.

Diatchenko at McGill University is trying to understand those differences. She is looking for genes that control pain sensitivity. A gene is a segment of DNA that codes, or holds instructions, for producing a protein. Offspring inherit genes from their parents. Genes influence how an organism looks and behaves.

The sensitive people aren’t just wimpy or nervous. Areas of the brain involved in pain actually become active earlier in these people. That’s what brain scans using functional magnetic resonance imaging, or fMRI, show. (fMRI uses strong magnetic fields to create pictures of brain regions while they are active.) Some people, in other words, actually feel the pain sooner. They literally can’t take the heat.

Many different genes are involved in sensing pain. Scientists have identified some that seem to be especially important. One is a gene called COMT.

Different forms of this gene occur naturally, Diatchenko observes. Some people have a form that is very active. They have a higher threshold for pain. In other people, the gene is less active. These people feel pain more readily. Interestingly, the gene isn’t just involved in pain. Differences in COMT also have been linked to differences in emotions, planning, memory and even personality.

There are good reasons why understanding a person’s sensitivity to pain is important, Diatchenko says. People who are more sensitive to acute pain are more likely to develop a chronic pain condition. Learning more about what makes their system for processing pain so touchy might help researchers find new ways to treat long-term pain.

That is the ultimate goal for nearly every scientist who studies pain biology. As these experts fill in the blanks, they are hopeful that their research will help the millions of people who suffer from unexplained pain.

It might seem like there’s still a lot to learn. In part that is because the work has just begun. Only since the early 2000s have scientists started to understand pain at the level of cells and molecules, Price says. “We’re still in early days” of pain research, he notes. “The next 15 years? Who knows what it will bring.”

acute An conditions, such as an illness (or its symptoms, including pain), that is typically short in duration but severe.

arthritis A disease that causes painful inflammation in the joints.

brain scan  The use of an imaging technology, typically using X rays or a magnetic resonance imaging (or MRI) machine, to view structures inside the brain. With MRI technology — especially the type known as functional MRI (or fMRI) — the activity of different brain regions can be viewed during an event, such as viewing pictures, computing sums or listening to music.

chronic  A condition, such as an illness (or its symptoms, including pain), that lasts for a long time.

compound  A compound is a substance formed from two or more chemical elements united in fixed proportions. For example, water is a compound made of two hydrogen atoms bonded to one oxygen atom. Its chemical symbol is H2O.

COMT  A gene that is involved in sensing pain. It has been linked to differences in emotions, planning, memory and personality.

functional MRI (orfMRI)  A type of medical imaging that uses strong magnetic fields to create pictures of brains while they are active.

gene  A segment of DNA that codes, or holds instructions, for producing a protein. Offspring inherit genes from their parents. Genes influence how an organism looks and behaves.

migraine An intense headache that is often accompanied by nausea and vision changes.

molecule An electrically neutral group of atoms that represents the smallest possible amount of a chemical compound. Molecules can be made of single types of atoms or of different types. For example, the oxygen in the air is made of two oxygen atoms (O2), but water is made of two hydrogen atoms and one oxygen atom (H2O).

receptor  A molecule in cells that serves as a docking station for another molecule. That second molecule can turn on some special activity by the cell.

TrpV1    A type of pain receptor on cells that detects signals about painful heat. 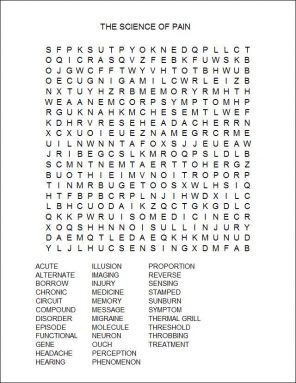