In the misty mountaintops of New Guinea, golden-mantled tree kangaroos nibble on orchids. A spiky plant called the silversword grows on the ashy slopes of a volcano in Hawaii. Both species live nowhere else in the world. That’s one reason both are extremely rare.

And crazy as it might seem, species rarity has probably always been the norm, says biologist Eric Dinerstein. He is the director of Biodiversity and Wildlife Solutions at RESOLVE, a nonprofit group in Washington, D.C.

An animal or plant is rare if there aren’t very many of its type, or species. A population of rare animals may live grouped together in one small patch of habitat, like the tree kangaroo or the silversword. (Habitat is the environment in which a species lives.) Other animals are rare to find in any one place because the members of its species are spread out over a large area. For example, jaguars live from Mexico to Central and South America, but the number of cats in a single forested area will be very small.

In his recent book, The Kingdom of the Rarities, Dinerstein points out that as many as 75 percent of all species on Earth are rare. If you went to a tropical rainforest and spent a day there watching birds, gathering leaves from trees or catching butterflies, you’d notice a pattern, he explains. You’d see a few common species again and again. All of the rest, though, would be rare. You’d find only one or two of each. “ In other words,” he says, “rarity is common,”

Species are rare for many reasons. Sometimes, rarity is natural. It often occurs when a population becomes isolated. An island or mountaintop can cut off some animals or plants from others of their kind. Over time, that isolated population may evolve into a new species. Adapted to its particular home, that new species will now exist nowhere else on Earth. This is why 90 percent of the flowering plants on Hawaii exist only on that string of islands.

Sometimes, though, people can cause a species to become rare. Humans now inhabit 38 percent of Earth’s land. And our species has transformed this land from wild forests, grasslands and jungles into farms, pastures, cities and roads. This erasure of wildlands is the number one reason so many plants and animals are rare today, Dinerstein says.

The role of people in rarity

People can cause rarity directly when they hunt or harvest a species faster than its population can replace the individuals that are lost. For example, fishermen have caught so many bluefin tuna that this species is now very rare. Similarly, all eight species of scaly anteaters — or pangolins — are being eaten at levels that threaten these animals with extinction.

That was the finding of a July 2014 report by the International Union for Conservation of Nature and Natural Resources, or IUCN. The organization, based in Gland, Switzerland, estimates that “in the last decade alone, it is believed that more than one million pangolins have been taken from the wild.” Most are shipped to diners in China and Vietnam. The hunting of this animal is so intense, IUCN reports, that pangolins are now “the most illegally traded animal in the world.”

Large predators such as the tiger are both naturally rare and rare because of people. The reason: Each tiger needs a large amount of game (perhaps one deer per week) to remain strong and healthy. Tigers naturally spread out so that they can each find enough deer or other prey to eat. The tiger population will always be much smaller than the population of its prey.

In the past century, however, people have transformed much of the land that was once the tigers’ home range. What may have been forest is now towns, farms and roads. That reduces the amount of prey available. To find enough deer and other animals, the big cats should roam ever larger areas. But they can’t. The space available to them is shrinking year by year.

And, of course, there’s yet a third pressure: People continue to hunt tigers as trophies and for use in traditional medicines. They do this even though it is illegal and the traditional cures have no health benefit.

So although rarity is a normal part of nature, human activities can rapidly and dramatically increase its extent. If a species’ rarity intensifies, it might even disappear completely and forever.

More than 5 million years ago, ancestors of rhinoceroses stomped across North America, Europe, Africa and Asia. Early humans probably hunted some of these species to extinction. Even modern rhinos, however, remained quite common in Africa and Asia until the early 1900s.

But no more. Today, so few rhinos remain that all five species of this animal face a high risk of disappearing forever.

Javan rhinos, for example, were once so numerous that farmers in Indonesia considered them a garden pest. Today, fewer than 50 Javan rhinos roam the wilds of Southeast Asia.

As recently as a century ago, black rhinos used to roam Africa in numbers approaching one million animals. There had been four subspecies. In 2011, scientists declared one of those subspecies extinct. It was the western black rhino of Cameroon. Today, there may be only a total of some 5,000 black rhinos alive in the wild.

Sumatran rhinos, which live only in parts of Indonesia and Malaysia, now number fewer than 100 individuals. With so few of these animals left, males and females can have a hard time finding each other. And that can quickly cut the number of baby rhinos. Even worse, when female rhinos go a long time without having babies, they often get tumors. Those tumors prevent future pregnancies.

John Payne works with the Borneo Rhino Alliance in Malaysia. His group is trying to save the Sumatran rhino. They are using technology and medicine to help the animals reproduce.

For instance, they can remove tumors from female rhinos. That lets them get pregnant. Payne’s group also can help captive rhinos become pregnant by combining egg and sperm in the lab to create embryos. They can then put those embryos into a female rhino where they may grow into a baby. “[Sumatran rhinos] are too rare in Malaysia to save them by any other means now,” says Payne.

Helping rhinos make babies will help, but only so much. That’s because such work won’t address the two main reasons rhinos are now rare: a loss of habitat and illegal hunting, called poaching. “In 2012, a rhino horn was worth more than its weight in gold,” Dinerstein notes. Some people believe that ground-up rhino horn reduces fevers. It doesn’t. (Even stranger, some people will pay money for rhino pee! It is supposed to help with ear infections and asthma. It doesn’t.)

Even with zero scientific evidence that rhino products cure anything, people continue to pay big money for the stuff. So hunters continue to kill rhinos for their horns, which they slice off and sell.

And a new study found the same is true for elephants. Between 2010 and 2012, poachers killed an estimated 40,000 African elephants for their tusks. And these illegal hunts for ivory continue, report George Wittemyer of Colorado State University, in Fort Collins, and his colleagues. In the August 18 Proceedings of the National Academy of Sciences, they describe the science used to calculate those poaching numbers .

To help save endangered plants and animals, scientists need to better understand the issues that have caused some species to become rare. Then, they can focus on solving the underlying problems. This important work is called conservation.

“Conservation is like a [soccer] game,” says Naresh Subedi. He’s project chief of the National Trust for Nature Conservation in Nepal. And just as in soccer, he says, to win in the conservation game, his team needs good defense and offense.

Loss of habitat and poaching in the Himalayan nation of Nepal drove the population of the greater one-horned rhinoceros — also known as the Indian rhino — down to fewer than 100 animals. This was back in the 1960s. Since then, conservation efforts have helped the population begin to rebound. Today, some 500 of these rhinos thrive in Nepal’s Chitwan National Park. And that number is growing.

Some really good news: Last year, there were no rhino deaths in Nepal from poaching. There also were no elephants or tigers killed there in all of 2013.

People like Subedi play defense on the conservation team. They monitor and study the rhinos. Early each morning, Subedi and his co-workers climb onto elephants and ride out into the jungle to look for rhinos. Some of the world’s tallest grasses grow here. Rhinos graze among these. “Some grasses are really tall,” Subedi says. “Even when you go on an elephant, you can’t see sometimes.”

Soldiers with the National Army of Nepal provide the rhino-protection team’s offense. They chase after poachers.

Subedi also teaches local kids and adults about wildlife conservation. When people learn about rare or endangered animals and plants, they are more likely to help protect them. And the people Subedi teaches do get involved.

Outside of Chitwan National Park, local people help protect nearby forests. Called community forests, these are not part of any official nature preserves. The local villagers, not the government, count the rhinos living there. They also help keep poachers out.

Eric Dinerstein used to work at Chitwan National Park. There he counted rhinos and helped establish the community forests. He recalls the first time he helped capture a greater one-horned rhino. Its scientific name is Rhinoceros unicornis. “On that foggy morning,” he recalls, “there in the elephant grass, I had touched my first unicorn.”

In some of their former homelands, rhinos may now be about as hard to find as unicorns. But they shouldn’t have to be. “Rarity is not a death sentence for a species,” says Dinerstein. However, to ensure the survival of rare species, “we have to work a little bit harder and a little more creatively,” he says.

In coming years, conservation will become even more important. Earth’s climate is warming. Humanity’s population continues to grow, now past 7 billion, and to use up more land and resources. These conditions can put additional stresses on rare species.

Getting people to stop doing things that hurt wildlife and the habitats they need to survive won’t be easy. But places like Chitwan National Park in Nepal teach us that people can work together to make a difference. People can preserve natural rarities — such as the silversword in Hawaii, where rangers have built fences to keep animals from eating the rare plants. Humanity also can work to preserve and even increase populations of animals so that they don’t become rare in the first place. 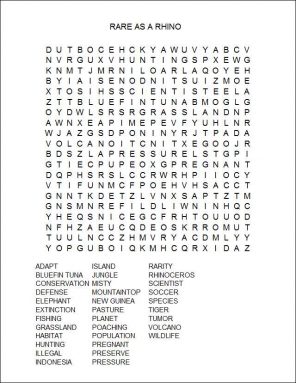