Almost 2 million years ago in what is now South Africa, a boy and a woman fell to their deaths through a hole in the ground. The pair had tumbled through the collapsed roof of an underground cave.

A storm soon washed their bodies into a lake or pool within the cave. Wet soil rapidly hardened around the bodies, protecting their bones.

The cave sits within the Malapa Nature Reserve in South Africa. In 2008, 9-year-old Matthew Berger was exploring the cave when he spotted a bone sticking out of a chunk of rock. He alerted his father, Lee, who was digging nearby. Lee Berger realized the bone came from a hominid. That’s a term for humans and our extinct ancestors (such as Neandertals). As a paleoanthropologist, Lee Berger studies such hominids at South Africa’s University of the Witwatersrand.

The partial skeletons of the roughly 9-year-old boy and 30-year-old woman that Matthew and his dad turned up led to excavations of bones from other ancient individuals as well. And these ancient remains have opened a big scientific debate about the origin of the Homo genus. This is the group of upright-walking, big-brained species that eventually evolved into people: Homo sapiens. (A genus is a group of similar-looking species. A species is a population of animals, such as humans, that can breed with each other.)

The earliest known hominids appeared around 7 million years ago in Africa. Researchers generally agree that hominids evolved into Homo from a small-brained genus called Australopithecus (Aw STRAAL oh PITH eh kus). No one knows precisely when that happened. But it was between 2 million and 3 million years ago.

Scientists have dug up few hominid fossils from that stretch of time. For that reason, researchers call early Homo evolution “the muddle in the middle” of the hominid family tree. The Malapa cave’s skeletons are the most complete finds from this muddled period.

In 2010, Berger’s team identified these fossil folk as members of a previously unknown species. He called it Australopithecus sediba (Seh DEE bah). In six papers published in the April 12 issue of Science, the scientists described what their newly finished reconstructions of the long-dead boy and woman looked like.

And in those papers, Berger argues that A. sediba is the most likely ancestor of the first Homo species. Moreover, he claims, these fossils establish southern Africa as where the big evolutionary action was.

Many anthropologists disagree. But Berger’s South African finds have renewed interest in the muddle in the middle, notes Susan Antón. She’s a paleoanthropologist at New York University in New York City. She predicts that “For the next decade, questions about the origins of the Homo genus will be in the forefront of hominid research.”

Berger never thought that hominids in southern Africa nearly 2 million years ago would look anything like the Malapa individuals he unearthed. Neither did anyone else. And the reason: They look like an odd mix of later species, ones belonging to the Homo genus, and earlier species from the Australopithecus genus.

Indeed, Berger says, considering only their humanlike skulls, hands and hips, the Malapa fossils easily could be mistaken for a Homo species. Narrow faces with slight chins and rounded faces are some of the Homo-like traits of A. sediba. That’s why he finds this species makes a remarkably good bridge between hominids from more than 2 million years ago and those in the Homo genus.

Still, A. sediba’s brain was small, like those of other early hominids. It was only a little bigger than a chimpanzee’s. Adults of the ancient species reached heights somewhere between those of chimps and adult humans.

A. sediba’s teeth look much like those of Australopithecus africanus, another southern African hominid that lived from around 3.3 million to 2.1 million years ago. In a few aspects, though, the Malapa individuals’ teeth look different — more like those of early Homo species.

At least as important, A. sediba’s skeleton looked little like those of East African relatives, including Australopithecus afarensis. This species lived farther north, in East Africa, from about 4 million to 3 million years ago. The most famous partial skeleton of A. afarensis was nicknamed Lucy. Since her remains were unearthed in 1974, many researchers have thought that Lucy’s species eventually led to the Homo line.

Berger’s team now disagrees. A. sediba’s lower jaws bridge the Australopithecus and Homo line. In part, the Malapa finds resemble the lower jaws from A. africanus. But they also look partly like fossil chops from Homo habilis and Homo erectus. H. habilis, or handy man, lived in eastern and southern Africa from 2.4 million to 1.4 million years ago. H. erectus inhabited Africa and Asia from about 1.9 million to 143,000 years ago.

Unlike early Homo species, A. sediba’s long arms were built for tree climbing and possibly hanging from branches. Yet the Malapa pair had humanlike hands capable of gripping and manipulating objects.

A. sediba also possessed a relatively narrow, humanlike pelvis and lower rib cage. Its upper rib cage was another matter. Relatively narrow and apelike, it fanned out like an inverted cone. This would have helped A. sediba climb trees. A cone-shaped chest interferes with arm swinging while walking and running — a Homo trait. This suggests the Malapa folk probably didn’t move across the ground as well as the early Homo species did.

Preserved spinal bones indicate that the Malapa hominids had long, flexible lower backs, much as people today do, another link to the Homo genus.

Finally, A. sediba’s leg and foot bones show that the species walked on two legs, but with an unusual, pigeon-toed gait. Even some people walk this way.

“A. sediba could be a transitional type of hominid on the way to the Homo genus,” concludes Darryl de Ruiter. A paleoanthropologist at Texas A&M University in College Station, he was part of the international team that studied the Malapa skeletons.

Did A. sediba evolve too late?

Many researchers outside of Berger’s group think the Malapa hominids couldn’t be Homo ancestors. These scientists claim the species just evolved too late.

By 2 million years ago, several Homo species already lived in eastern and southern Africa, observes Christopher Stringer. An anthropologist, he works at the Natural History Museum in London, England. He argues that the Homo genus most likely evolved in eastern Africa.

“The Malapa line may have died out as a failed experiment in how to evolve an upright stance and humanlike features,” Stringer says.

Not necessarily, says Berger. He questions whether those few fossils that Stringer refers to, dating to shortly before A. sediba’s time, really belonged to the Homo genus.

Consider, Berger says, the crown jewel of early Homo fossils. Found in 1994, it consists of just an upper jaw and palate (part of the mouth). They were discovered on a small hill in Ethiopia. Berger now says this fossil may be much younger than the 2.3-million-year-old soil its discoverers claim it came from.

What’s more, he argues, the Ethiopian jaw and palate may simply be too few bones to demonstrate that they come from a Homo genus. For instance, A. sediba’s mix of Homo and Australopithecus features show how easy it would be to mistake a fossil jaw for one or the other genus without having a nearly complete skeleton.

A. sediba most likely originated in Africa more than 2 million years ago, Berger says. He suspects it was a direct ancestor of the first true Homo species: H. erectus.

Berger’s Texas colleague agrees. That’s the evolutionary story with the strongest fossil support, de Ruiter says. He comes to that conclusion mainly from studying the Malapa skeletons and the skeleton of an H. erectus boy that had been unearthed earlier in East Africa.

Fossils previously proposed as early Homo representatives are too few and incomplete for his taste. “Every single scrap of fossil evidence for early Homo before 2 million years ago could fit in a shoe box — along with one shoe,” de Ruiter says.

In a big way, Berger has Donald Johanson to thank for his Malapa discoveries. An anthropologist at Arizona State University in Tempe, Johanson led the excavation of Lucy’s skeleton. This was at Ethiopia’s Hadar site in 1974. Johanson became Berger’s hero and inspired him to pursue anthropology.

Later, as a college student in Georgia, Berger invited the famous anthropologist to have breakfast with him when Johanson was in town to give a talk. At the time, Johanson advised the young man to do graduate work at Witwatersrand and investigate South Africa’s rich fossil sites.

Now, 25 years later, Berger’s rejection of East Africa as the origin of Homo species irritates Johanson. “It’s wonderful that Berger found the Malapa fossils, but he wants to sweep evidence for early East African Homo under the rug,” Johanson says.

Johanson coauthored a 1996 analysis of another Hadar fossil. It was an upper jaw and roof of the mouth that many hominid researchers regard as the oldest known Homo specimen.

That specimen was already broken in half along the top of the mouth when it was discovered on a low, steep hill. Soil clinging to both pieces enabled researchers to identify a section of the hill from which the pieces had eroded, probably weeks or months earlier.

A layer of volcanic ash just above the erosion area formed about 2.3 million years ago, Johanson says. And the shape of the upper jaw places it in the Homo genus, he asserts.

Lucy’s species — A. afarensis — walked on humanlike feet, Johanson adds. He bases that claim on studies of Lucy and other fossils of her kind, as well as on 3.6-million-year-old, preserved footprints of several members of Lucy’s species. He concludes that East Africa’s A. afarensis was a more likely direct ancestor of Homo than was South Africa’s A. sediba.

In fact, Johanson suspects A. sediba had nothing to do with the evolution of the Homo genus.

To prove where Berger’s discoveries fit in the human family tree, more fossils from the muddle in the middle will be needed. Hoping to find them, Berger and his colleagues resumed digging at Malapa last September. They suspect the site holds at least three more hominid skeletons.

So stay tuned. The 2-million-year-old story of A. sediba is far from over. 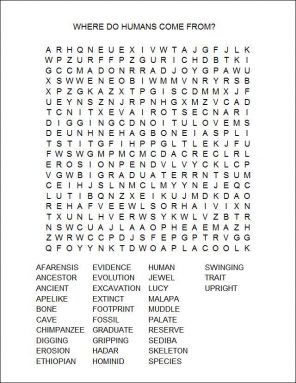