Bump a glass and any water inside might slop over the side. Splash in the bathtub and waves slosh. Toss a rock into a pond and ripples move outward in expanding rings. In each case, the water moves in waves. Those waves carry energy. And the more energy that gets added to a watery environment, the more powerful the waves may become.

Now imagine an undersea earthquake and the tremendous amount of energy it can transfer to the ocean. That is because the movement of the Earth’s crust can shift huge volumes of water, unleashing a parade of great and powerful waves. The water races away at speeds up to 800 kilometers (500 miles) per hour, or as fast as a jet plane.

Eventually those waves reach shallow water. They slow down and swell, sometimes as high as a 10-story building. When the waves eventually crash onto land, they can swamp hundreds of kilometers (miles) of shoreline. They may snap trees like twigs, collapse office buildings and sweep away cars. Among nature’s most powerful forces of destruction, these waves are called tsunamis (tzu NAAM eez). The Japanese term means “harbor wave.”

Tsunamis strike coastal regions about 10 times every year. The first of this year occurred on February 6, after an earthquake shook the seafloor off the Solomon Islands. The quake unleashed a tsunami that killed at least five people in the southwestern Pacific island nation.

Two far bigger tsunamis stand out in the last 10 years for having caused especially widespread destruction. The most recent of these hit the island nation of Japan on March 11, 2011. In just minutes, the tsunami destroyed cities and killed about 16,000 people. Its waves also wrecked a coastal power plant, triggering a nuclear disaster.

The most powerful tsunami in recent history occurred on Dec. 26, 2004. It began with an earthquake on the ocean floor off the island of Sumatra, in Indonesia. The tsunami’s highest waves stood about 50 meters (167 feet). Witnesses reported that the approaching waves sounded like a freight train. The tsunami killed about 230,000 people, not just in Indonesia but in countries across South Asia and even East Africa too.

Two of the largest earthquakes in the last century triggered both tsunamis. Each quake transferred an enormous amount of energy from the solid earth to the liquid ocean.

“Atomic bombs are tiny compared to the Sumatra or Japan earthquakes,” says oceanographer Dailin Wang, who watches for tsunamis at the Pacific Tsunami Warning Center in Hawaii. He says 200,000 of the most powerful nuclear bombs exploding together would release as much energy as the quake that shook Japan.

There’s no stopping a tsunami. Still, there are ways to limit its impact. Getting people out of the way is the most important. So Wang and other scientists develop fast and accurate tsunami forecasts. These researchers keep an eye on the Earth using a worldwide network of buoys, seismometers and satellites. When necessary, these experts warn shoreline populations that potentially devastating waves are on the way.

Other scientists are designing structures to lessen a tsunami’s destruction. And others yet are studying tsunami-like waves to learn more about our planet deep underwater.

In many ways, tsunami research means reading waves much like the pages of a book. Waves don’t just happen. Other forces trigger them. As waves speed through the water, they carry and transmit information about those forces. By understanding that information, scientists hope to learn more about our Earth in ways that can save lives.

Powerful earthquakes cause most tsunamis. But not all big earthquakes set off major tsunamis. (Two giant earthquakes last April, for example, set off small tsunamis that caused no destruction.) At the warning center in Hawaii, Wang and his fellow tsunami-watchers monitor earthquake activity the world over. The team works 24 hours a day and seven days a week. The experts scan reports from seismometers, or sensors that detect movements in Earth’s crust. Data from these devices, deployed across the globe, can help calculate an earthquake’s magnitude, or strength.

The Pacific Tsunami Warning Center detects dozens or more earthquakes every month. Only about once a month does the team identify an earthquake that could trigger a tsunami. Each of these “really gets our adrenaline going,” says Wang. “It’s pretty tense.”

After a powerful earthquake strikes, the scientists turn their attention to tide gauges and special sensors carried by buoys. That is because a newborn tsunami can hide in plain sight. In the deep ocean, a tsunami may raise sea levels by only a few centimeters (inches). Aboard a boat, you might not notice that. But a floating science station would. The instruments transmit their measurements to satellites. Those satellites then relay the information to warning centers, such as the one in Hawaii. Scientists then use that data to determine a tsunami’s strength and path.

The earthquake that triggered the 2011 tsunami struck 129 kilometers east of Japan. During the quake, one of Earth’s tectonic plates slipped beneath another. It first took scientists about 15 minutes to determine this undersea quake was big. A few minutes more, and the experts estimated the quake’s magnitude at 9.0. That is large enough to trigger a massive tsunami.

“Even when we didn’t have any waves recorded, we knew it was really bad for the people of Japan,” Wang says. Luckily, Japan had a tsunami warning system in place. Still, the fast-moving waves struck with enough force to cause billions of dollars in damage. Even more advance warning could have reduced that impact.

Sometimes, you cannot move lots of people quickly out of the way of a tsunami. So some scientists want to move the tsunami. Sébastien Guenneau, an engineer at the Fresnel Institute in Marseille, France, is designing structures to protect vulnerable coastlines from killer waves.

Guenneau’s shield doesn’t block a tsunami. Instead, the structure makes the coastline invisible to its waves.

Invisibility is a hot topic in science. In 2006, American and British scientists built the world’s first invisibility cloak. We can only see things that reflect, absorb or produce light. The cloak works by redirecting light around an object. That renders it invisible.

Other scientists began working to hide objects from other types of waves. A team of Spanish engineers, for example, designed an acoustic cloak that redirects sound waves. Guenneau and other scientists wondered if water waves also could be shifted. They soon envisioned installing tsunami cloaks offshore.

“We don’t want to break the wave,” Guenneau says. “We just want to guide it in the right direction. You have to imagine that you can split your tsunami into two,” he explains. An effective cloak would deflect one wave to the left and the other to the right.

Guenneau first developed this concept on a computer. He later built a tiny model just a few centimeters across. It was made from a collection of small upright pillars in concentric rings. As a wave washes into the structure, the array pushes the water to the right or left. Each wave turns into a whirlpool.

His most recent tsunami test cloak measures 2 meters (more than 6 feet) across. Guenneau recently tested it in a 15-meter water channel. The cloak worked. Up next are even larger models.

Unfortunately, shielding a large beachfront would be tricky. It would require a cloaking device hundreds of meters long. “And you’d need to plunge it in the ocean and attach it to the bottom,” Guenneau adds.

The structure would be enormous. If constructed from tall, wooden pillars, “there would be no impact on the environment,” Guenneau predicts. It could even provide habitat for sea life.

Since tsunamis and earthquakes go hand in hand, similar cloaks might protect against seismic waves too, Guenneau says. In fact, he and his collaborators designed such a device. When planted in the ground, it might protect nuclear reactors and other buildings from earthquakes.

The ocean isn’t the only place where large water waves can wreak havoc. In a swimming pool, large lake or any other enclosed body of water, a wave known as a seiche (SAYSH or SESH) may form.

Earth scientist David Mencin says a seiche is more like the slosh in a bathtub than a tsunami. A seiche can develop when the wind blows across a lake for a long time. That wind piles up water at one shore. When the wind stops, the water flows back (and then forth) as a wave. Though lesser known and generally smaller than tsunamis, seiches can still be deadly.

Mencin works with a university-based geoscience research institution based in Boulder, Colo. It brings together a large network of scientists. Mencin’s team has used strainmeters, or devices that measure the stretch and tug of the Earth, to track tsunamis as they approached North America’s west coast. Recently, Mencin used the same devices to study a seiche in Yellowstone Lake. Like much of Yellowstone National Park, this lake sits atop an ancient volcano. Beneath the rocky bottom is a reservoir of partially molten rock, or magma.

The seiche in Yellowstone Lake puzzles scientists. It never stops bouncing from shore to shore, even when ice covers the lake. As the seiche travels, it moves a lot of water to and fro over a small patch of Earth’s crust. In fact, the weight of that water deforms the crust, just as a bowling ball does when rolled across an air mattress.

However, that bowling ball rolls differently if the air mattress is floating on water or lying on a cement deck. It’s similar for the seiche, which travels differently than it would if Yellowstone Lake sat atop thick, solid crust. So using strainmeters to study the seiche can reveal information about the structure of Earth’s crust, Mencin says. The same goes for tsunamis, he adds.

While tsunamis and seiches are destructive, these waves also can be instructive. Their swells relay information about conditions deep within our turbulent planet.

adrenaline A hormone produced by glands (adrenal) when someone is stressed by fear, anger or anxiety. It can make the heart beat faster and allow muscles to perform better than normal. Adrenaline is part of the body’s “fight or flight” response to stress. It can briefly help someone run faster or temporarily boost the performance of muscles (as for lifting weights).

buoy A floating device anchored to the bottom of a body of water. A buoy may mark channels, warn of dangers or carry instruments to measure the environment.

concentric A series of circles or rings that have a common center point.

earthquake A sudden and violent shaking of the ground, sometimes causing great destruction. Earthquakes result from movements within Earth’s crust or volcanic action.

seiche A temporary disturbance or oscillation in the water level of a lake or other enclosed body of water, especially one caused by changes in atmospheric pressure.

seismology The scientific study of earthquakes and similar phenomena.

strainmeter  A device used to measure changes in Earth’s crust, due to shifts in mass or other applied forces.

tectonic plate One of the giant slabs that make up Earth’s crust.

tsunami One or many long, high sea waves caused by an earthquake, submarine landslide or other disturbance. 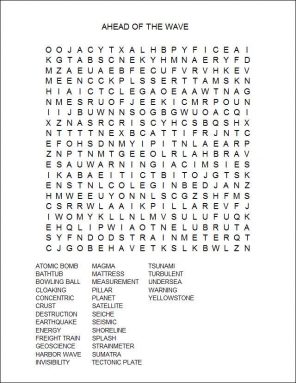