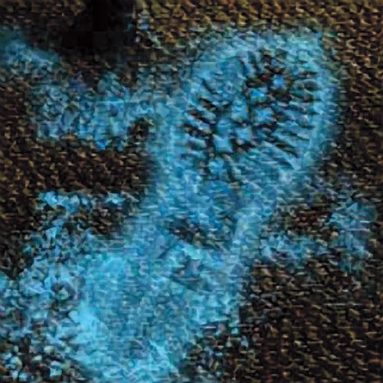 “Oxy” cleaners may make forensic tests, such as this one checking a shoeprint for blood, ineffective.

Criminal investigations begin with a search for clues. Teams of investigators arrive at a crime scene armed with special fact-finding gear. They look for standard evidence like fingerprints, footprints or blood at the scene of a crime.

But scientists recently discovered something troubling. Some new household cleansers can remove all traces of blood. If criminals simply use these products to clean up after themselves, police may have a hard time gathering evidence.

To get at particularly stubborn stains, like an accident from your pet, your parents may use one of these new products called “oxy” cleaners. These cleansers use oxygen and water to attack stains, including blood. Some of the ads claim to clean “over 101 stains on multiple surfaces.” That sounds good, but scientists have identified a downside to that much cleaning power.

The three standard tests for picking up blood rely on a protein in the blood called hemoglobin. This protein loves oxygen. In the body, it’s hemoglobin’s job to grab onto oxygen and carry it from the lungs to the rest of the body. But the new oxy cleaners flood a blood stain with a lot of oxygen. Once the protein gets its fill of oxygen, it won’t even bother to snatch oxygen from the investigators’ blood detecting tests. This means these tests will come up negative.

When you scrape your knee, a nurse, parent, or coach may rub it with hydrogen peroxide. Hydrogen peroxide contains hydrogen and oxygen and helps stop the bleeding. The chemical causes oxygen that looks like foam to rise to the surface of your cut. There, too, hemoglobin in your blood seeks the oxygen in the hydrogen peroxide.

Common blood detectors rely on the same kind of reaction between blood’s oxygen and hydrogen peroxide. The detectors contain hydrogen peroxide that reacts with hemoglobin in a blood stain. When hemoglobin grabs some oxygen, the blood detecting test gives a positive result. Depending on the chemical in the test, a positive result might glow or turn pink.

In the name of science, a group of researchers decided to test the oxy cleaners. The scientists made their own fake crime scene by using samples of their own blood to stain a couple pieces of cloth. The team put five drops of their own blood on a soft cotton cloth, some jeans and a towel.

Then, the researchers washed part of each cloth sample in “Neutrex,” an oxy cleanser. The team thought the oxygen in Neutrex would be released upon contact with water. The large amount of oxygen would cause the hemoglobin to work overtime. This would effectively clean up the blood, but also tire out the hemoglobin so that it wouldn’t react with the tests. The scientists also washed other samples of blood-stained cloths with a traditional cleaner. All the samples were then left to air dry.

The cleaners worked as the scientists suspected. The cloths washed without oxy cleaners looked clean, but the three tests still picked up the blood traces. But after an oxy wash, the other sample fabrics looked spotless to the naked eye, and also came up clean on the blood tests. The difference: The oxygen bath given to hemoglobin exposed to the oxy cleaners. After spending time in the presence of that much oxygen and trying to snatch it, the hemoglobin couldn’t react with the investigators’ tests.

Despite the study’s results, this cleaning possibility doesn’t mean that bloody crime scenes are a thing of the past. “People committing violent crimes often don’t have time to clean up; they leave a lot of stuff behind,” says Walter Rowe, a forensic scientist, someone who examines evidence in a legal case, at George Washington University in Washington, D.C.