Luckily, I’m not crazy. It’s true that some types of hallucinations are associated with mental illnesses. But many healthy people also experience “phantom” senses. Some hear music that isn’t there. Some see visions. Others live with imaginary smells filling up their noses.

“Hallucination is a unique and special category of consciousness and mental life,” Oliver Sacks wrote in his recent book. Sacks is a famous neurologist and author. (A neurologist specializes in disorders of the brain, spinal cord and nerves).

“Though [hallucinations] are probably as old as the human brain, our understanding of them has greatly increased over the last few decades,” Sacks wrote. That’s happening because of new technology that lets experts peer inside the brain. There is still a lot to discover about these ghosts in our heads. But as scientists learn more about them, they are learning something about how all brains work.

Have you ever heard of phantom limbs? People who have lost an arm or leg often feel pain that seems to come from the missing limb. Such pain is one of the most common — and famous — types of hallucinations. A 2010 study of people with amputations found that more than four in every 10 who had lost an arm or leg had felt ghost pain in the previous week.

Tamar R. Makin at the University of Oxford, in England, and her colleagues studied people with pain that seemed to come from missing hands. For a 2013 study published in the journal Nature, they asked patients to imagine moving that phantom hand. At the same time, they scanned each volunteer’s brain using a tool called functional magnetic resonance imaging, or fMRI. It makes images of the brain by measuring blood flow. A brain region that’s active will uses more blood and therefore light up in an image.

If you think phantom pain is strange, consider people who smell odors that don’t exist. It’s called phantosmia (Fant OZ mee ah). Some individuals catch whiffs of imaginary scents day and night. And they’re not of rose petals or chocolate. Most sufferers report smelling things like burnt rubber or rotting meat, says Donald Leopold. A professor of surgery at the University of Vermont in Burlington, he specializes in conditions that affect the nose.

Most of his patients are normal and generally healthy. Their noses just can’t ditch a terrible smell. Often, he says, the phantom scent appears located in just one nostril.

Leopold says that phantom smells, like other phantom senses, occur when something goes wrong in the brain. However, he believes that something also happens in the nose. It helps trigger the brain to create that stinky ghost. He doesn’t know exactly what the trigger is. But he has found a way to turn it off.

He focuses on the nasal cavity, a large open space behind the nose. He treats many patients by plugging up this cavity with saline (or salt water). It’s a quick fix: He simply pours saline into the nose while the head is tilted back. Because the upper nasal cavities are so narrow, he says, that saline can stay in place for up to a few hours. And as long as the saline stays there, it seems to shut off the trigger, making the stink disappear.

If that doesn’t work, Leopold can use surgery to remove a patient’s scent receptors. Those are molecules in cells that detect outside scents.

Luckily, those scent-detecting tissues are always re-growing. “The nerves you used to smell at Halloween will be gone by Christmas,” Leopold says. So after the surgery, the nose will naturally regrow the cut-out tissue. And so far, he says, that type of surgery has successfully snuffed out the stinky scents in all patients who had suffered from them. “The sense of smell comes back without the phantom smells,” he says.

Phantom smells remain very poorly understood. But when it comes to phantom music, science is beginning to put the pieces together. Researchers in Wales, for instance, studied 30 cases of musical hallucinations. Two out of every three people who heard ghost melodies were otherwise mentally healthy, they found. Most were elderly. And one-third suffered from at least some hearing loss.

“I think people tend to underestimate how much auditory [sound] hallucinations occur in perfectly normal people,” says Diana Deutsch. A psychologist at the University of California, San Diego, she specializes in behavior and mental processes. As a well-known researcher of musical illusions, she’s had emails from hundreds of people who report hearing phantom music.

(Click title to listen) Is the melody that you hear real, or is it all in your head? Some people have a hard time telling. Even though they are otherwise healthy, they hear music that isn’t playing. It’s a type of hallucination.

In one case, Deutsch says, a woman woke to the sound of loud music. She asked her apartment manager to tell her neighbors to turn down their radio. In fact, there had been no music. But the woman didn’t believe it, so she called the police to make a complaint about the noise!

Some researchers have looked at the brains of people who hear phantom tunes. Tim Griffiths is a neurologist at the University of Newcastle upon Tyne, in England. He used a technique called PET (for positron emission tomography) to view the brains of six people. All had hearing loss and heard phantom music. Similar to fMRI, the PET scans showed blood flow in the brain, revealing which brain regions were most active.

When his patients “heard” phantom music, a network of brain regions became very active. This activity was similar to what neurologists see in the brains of normal people listening to real music. The patterns were not identical, however. Unlike people listening to actual music, those who heard phantom strains didn’t have activity in the primary auditory cortex. That’s the pair of small brain regions on either side of the head that process sounds.

People with missing limbs feel pain in their missing parts. And people who don’t hear well are more likely to hear phantom music. Could it be that when the brain lacks touches or sounds to process, it invents something to do? In fact, that’s what appears to happen in some blind people.

Eye disease is the most common cause of visual hallucinations, notes Dominic ffytche (which is pronounced Fitch and isn’t capitalized). A psychiatrist, or physician specialized in treating mental disorders, ffytche works at University College London, in England.

Seeing hallucinations is so common in blind people that it has a name: Charles Bonnett syndrome. And as many as 50 or 60 percent of people with significant vision loss have it, ffytche says.

Most people see dots, flashes of light or colored blobs. Some see geometric patterns, like a brick wall or a checkerboard. Many even see strange faces with giant eyes or teeth. Another common vision: people in uniform with hard-to-miss headwear, like military helmets or Abraham Lincoln-style top hats.

The ghostly images “seen” by blind people appear to develop in roughly the same brain regions that go to work when a sighted person looks at a real face. Concludes ffytche: “As far as your brain is concerned, it’s the same experience.”

For ffytche, the best part about studying phantoms is what they can tell science about the normal brain. For instance, he was curious why so many Charles Bonnett patients see strange, distorted faces. So he started investigating. What he found surprised him. He knew that all brains have a special region for processing faces. But a second region actually lights up in response to misshapen faces, he found.

Why would that be? It’s possible this area of the brain may help people make out individual features, such as unusual or distinctive noses and lips, he says.

“You wouldn’t think there would be a part of the brain devoted to a cartoon face, but the brain has an area for that. We wouldn’t have even been looking for it [except that] we’d heard these descriptions by patients with hallucinations,” he says.

“We don’t understand how the brain creates the picture of the world you see around you,” he adds. “Hallucinations give you a clue.”

Next, he hopes to figure out why so many patients see people with crazy hats. Is there also a brain region for wacky headgear? That clue could lead to more surprising findings about our brains, he says.

Of course, that’s not the only question left to answer about phantom senses. To ffytche, the key question is: “What’s different about the brains of people who get hallucinations and the people who don’t?” The answer may emerge soon. So stay tuned.

auditory  Relating to the sense of hearing.

fMRI  A tool to create images of the brain by measuring changes in blood flow in the brain, showing which regions “light up” when they are active.

nasal cavity  The large open space behind the nose.

neurologist  A physician who specializes in disorders of the brain, spinal cord, and nerves.

olfactory  Relating to the sense of smell

olfactory receptors  Molecules in cells that pick up olfactory signals from outside the cell.

PET Tool that creates images of blood flow to the brain to show which regions are active.

phantom  A specter or ghost; something that’s not real.

primary auditory cortex  A pair of small brain regions on either side of the head that process sounds.

psychiatrist  A physician who specializes in treating mental disorders.

psychologist  A scientist who studies and treats behavior and mental processes. 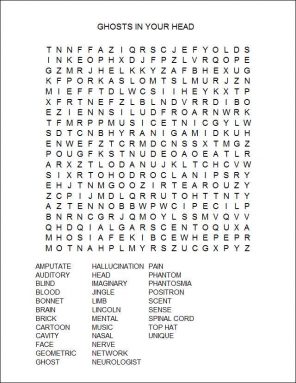