Musicians, athletes and quiz bowl champions all have one thing in common: training. Learning to play an instrument or a sport requires time and patience. It is all about steadily mastering new skills. The same is true when it comes to learning information — preparing for that quiz bowl, say, or studying for a big test.

As teachers, coaches and parents everywhere like to say: Practice makes perfect.

Doing something over and over again doesn’t just make it easier. It actually changes the brain. That may not come as a surprise. But exactly how that process happens has long been a mystery. Scientists have known that the brain continues to develop through our teenage years. But these experts used to think that those changes stopped once the brain matured.

Recent data have been showing that the brain continues to change over the course of our lives. Cells grow. They form connections with new cells. Some stop talking to others. And it’s not just nerve cells that shift and change as we learn. Other brain cells also get into the act.

Scientists have begun unlocking these secrets of how we learn, not only in huge blocks of tissue, but even within individual cells.

The brain is not one big blob of tissue. Just six to seven weeks into the development of a human embryo, the brain starts to form into different parts. Later, these areas will each take on different roles. Consider the prefrontal cortex. It’s the region right behind your forehead. That’s where you solve problems. Other parts of the cortex (the outer layer of the brain) help process sights and sounds. Deep in the brain, the hippocampus helps store memories. It also helps you figure out where things are located around you.

Scientists can see what part of the brain is active by using functional magnetic resonance imaging, or fMRI. At the heart of every fMRI device is a strong magnet. It allows the device to detect changes in blood flow. Now, when a scientist asks a volunteer to perform a particular task — such as playing a game or learning something new — the machine reveals where blood flow within the brain is highest. That boost in blood flow highlights which cells are busy working.

Many brain scientists use fMRI to map brain activity. Others use another type of brain scan, known as positron emission tomography, or PET. Experts have performed dozens of such studies. Each looked at how specific areas of the brain responded to specific tasks.

Nathan Spreng did something a little different: He decided to study the studies. Spreng is a neuroscientist at Cornell University in Ithaca, N.Y. A neuroscientist studies the brain and nervous system. Spreng wanted to know how the brain changes — how it morphs a little bit — as we learn.

He teamed up with two other researchers. Together, they analyzed 38 of those earlier studies. Each study had used an fMRI or PET scan to probe which regions of the brain turn on when people learn new tasks.

Areas that allow people to pay attention became most active as someone began a new task. But those attention areas became less active over time. Meanwhile, areas of the brain linked with daydreaming and mind-wandering became more active as people became more familiar with a task.

“At the beginning, you require a lot of focused attention,” Spreng says. Learning to swing a bat requires a great deal of focus when you first try to hit a ball. But the more you practice, Spreng says, the less you have to think about what you’re doing.

Extensive practice can even allow a person to perform a task while thinking about other things — or about nothing at all. A professional pianist, for example, can play a complex piece of music without thinking about which notes to play next. In fact, stopping to think about the task can actually interfere with a flawless performance. This is what musicians, athletes and others often refer to as being “in the zone.”

Spreng’s findings involve the whole brain. However, those changes actually reflect what’s happening at the level of individual cells.

The brain is made up of billions of nerve cells, called neurons. These cells are chatty. They “talk” to each other, mostly using chemical messengers. Incoming signals cause a listening neuron to fire or send signals of its own. A cell fires when an electrical signal travels through it. The signal moves away from what is called the cell body, down through a long structure called an axon. When the signal reaches the end of the axon, it triggers the release of those chemical messengers. The chemicals then leap across a tiny gap. This triggers the next cell to fire. And on it goes.

As we learn something new, cells that send and receive information about the task become more and more efficient. It takes less effort for them to signal the next cell about what’s going on. In a sense, the neurons become wired together.

Spreng detected that wiring. As cells in a brain area related to some task became more efficient, they used less energy to chat. This allowed more neurons in the “daydreaming” region of the brain to rev up their activity.

Neurons can signal to several neighbors at once. For example, one neuron might transmit information about the location of a baseball pitch that’s flying toward you. Meanwhile, other neurons alert your muscles to get ready to swing the bat. When those neurons fire at the same time, connections between them strengthen. That improves your ability to connect with the ball.

Learning while you slumber

The brain doesn’t shut down overnight. In fact, catching some zzz’s can dramatically improve learning. That’s because as we sleep, our brains store memories and new information from the previous day. So a poor night’s sleep can hurt our ability to remember new things. Until recently, however, researchers didn’t know why.

A group of scientists at the University of Heidelberg in Germany provided the first clues. Specific cells in the hippocampus — that region involved in storing memories — fired when mice slept, the scientists found. But the cells didn’t fire normally. Instead, electrical signals spontaneously fired near the middle of an axon, then traveled back in the direction of the cell body. In other words, the cells fired in reverse.

This boosted learning. It did so by making connections between cells stronger. Again, the action sort of wired together the cells. Research by Olena Bukalo and Doug Fields showed how it happens. They are neuroscientists at the National Institutes of Child Health and Human Development in Bethesda, Md.

Working with tissue from rat brains, the scientists electrically stimulated nerve axons. Carefully, they stimulated them just in the middle. The electrical signals then traveled in reverse. That is just what the German scientists had seen.

This reverse signaling made the neuron less sensitive to signals from its neighbors, the experts found. This made it harder for the cell to fire, which gave the neuron a chance to recharge, Bukalo explains. When she then applied electric stimulation near the cell body, the neuron fired. And it did so even more strongly than it had before.

Cells involved in learning new information are most likely to fire in reverse during sleep, Bukalo says. The next day, they will be wired more tightly to each other. Although scientists don’t know for certain, it is likely that repeated cycles of reverse firing create a strong network of neurons. The neurons relay information faster and more efficiently, just as Spreng found in his study. As a result, those networks reflect an improvement in understanding or physical skill.

Neurons are the best-known cells in the brain. But they are far from the only ones. Another type, called glia, actually makes up a whopping 85 percent of brain cells. For a long time, scientists thought that glia simply held neurons together. (Indeed, “glia” take their name from the Greek word for glue.) But recent research by Fields, Bukalo’s colleague at the National Institutes of Child Health and Human Development, reveals that glial cells also become active during learning.

One type of glial cell wraps around nerve axons. (Note: Not all axons have this wrapping.) These wrapping cells create what’s known as a myelin sheath. Myelin is made of protein and fatty substances. It insulates the axons. Myelin is a bit like the plastic coating that jackets the copper wires in your home. That insulation prevents electrical signals from inappropriately leaking out of one wire (or axon) and into another.

In axons, the myelin sheath has a second role: It actually speeds the electrical signals along. That’s because glial cells force a signal to jump from one spot on the axon to the next. As it hops between glial cells, the signal moves faster. It’s kind of like flying from one spot to the next, instead of taking the train.

Fields has found that when new skills are learned, the amount of myelin insulating an axon increases. This happens as the size of individual glial cells increases. New glial cells also may be added to bare axons. These changes improve the ability of a neuron to signal. And that leads to better learning.

A thicker myelin sheath helps improve all types of brainy tasks. These include reading, creating memories, playing a musical instrument and more. A thicker sheath is also linked with better decision-making.

Nerve cells continue to add myelin well into adulthood, as our brains continue to grow and develop. The prefrontal cortex, for example — that area where decisions are made — gains myelin well into a person’s 20s. This may explain why teens don’t always make the best decisions. They’re not finished sheathing their nerve cells. But there is hope. And getting enough sleep certainly can help. Glial cells, like neurons, seem to change most during certain stages of sleep.

Exactly what causes the glial cells to change remains a mystery. Fields and his colleagues are hard at work to figure that out. It’s exciting, he says, to launch into a whole new field of research.

These changes in the brain allow for faster, stronger signaling between neurons as the brain gains new skills. But the best way to speed up those signals is to introduce new information to our noggins — slowly.

Many students instead try to memorize lots of information the night before a test. Cramming may get them through the test. But the students won’t remember the information for very long, says Hadley Bergstrom. He is a neuroscientist at the National Institutes of Alcohol Abuse and Alcoholism in Rockville, Md.

It’s important to spread out learning over many days, his work shows. That means learning a little bit at a time. Doing so allows links between neurons to steadily strengthen. It also allows glial cells time to better insulate axons.

Even an “aha!” moment — when something suddenly becomes clear — doesn’t come out of nowhere. Instead, it is the result of a steady accumulation of information. That’s because adding new information opens up memories associated with the task. Once those memory neurons are active, they can form new connections, explains Bergstrom. They also can form stronger connections within an existing network. Over time, your level of understanding increases until you suddenly “get” it.

Like Fields and Bukalo, Bergstrom stresses the importance of sleep in forming the new memories needed to gain knowledge. So the next time you study for a test, start learning new information a few days ahead of time. The night before, give your brain a break and go to bed early. It will allow your brain a chance to cement that new information into its cells. And that should boost your chances of doing well. 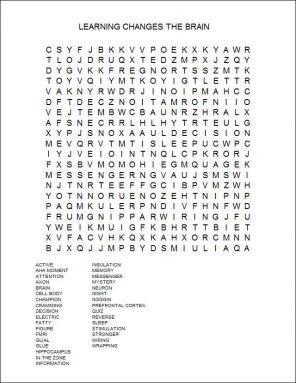