By Janet Raloff and Beth Mole

You’ve seen them on television, in celebrity photos and in magazine ads — cool superstars vaping on electronic cigarettes. Their high-tech gadgets seem to be available everywhere, from shopping malls to the 24-hour convenience mart. Is it any wonder that teens are being tempted to try out the vaping craze?

Yet scientists are disturbed by the fascination teens have with this nicotine-dispensing alternative to smoking. And with good reason. Data from a growing number of studies indicate that electronic cigarettes are not harmless.

Chemicals in e-cigarettes can damage lung tissue, provoking inflammation. That damage can reduce the ability of the lungs to keep out germs and other harmful substances, new studies show.

Yet teens seem largely unaware of — or unconcerned by — the emerging data on these risks. Their use of e-cigarettes has now surpassed that of conventional cigarettes. In the past year alone, e-cigarette use by U.S. middle-school and high-school teens has tripled. That’s the finding of a new government survey released last month.

Mitch Zeller directs the Center for Tobacco Products in Silver Spring, Md. It’s part of the U.S. Food and Drug Administration. “I can say definitively,” Zeller says, “that nicotine is harmful to the developing teenage brain. And no teenager, no young person, should be using any tobacco or nicotine-containing products.” These include e-cigarettes, he adds.

Unlike true cigarettes, electronic cigarettes do not burn tobacco. They don’t burn anything. Instead, they turn a flavored liquid into a vapor. Users inhale, or vape, the mist. The liquid usually contains nicotine. That is a highly addictive substance naturally found in tobacco.

It’s presence in vaping liquids is no accident. E-cigarettes were designed to help tobacco addicts wean themselves off of smoking. Cigarette users become addicted to tobacco’s nicotine, a natural stimulant. But smoking also exposes their lungs to tar and other pollutants. E-cigarettes allow users to inhale the nicotine without those other substances.

Yet nicotine is more than addictive. It can actually harm the lungs, a new study finds.

Researchers tested the effects of nicotine on lung tissue growing in a lab dish. Those lung cells were exposed to nicotine alone, in cigarette smoke and in e-cigarette vapors. Follow-up tests exposed lab animals to these same substances.

Nicotine caused inflammation in lung tissue. It also reduced that tissue’s ability to serve as a barrier to foreign substances, the researchers found. Irina Petrache is a doctor and lung specialist at Indiana University in Indianapolis. She headed the research team. Her group showed for the first time that nicotine, whatever its source, can harm lung tissue. So in this respect, her team now concludes, vaping would be no better for the lungs than cigarette smoking.

But even an e-cigarette liquid having no nicotine disrupted the barrier function of lung cells, the team found. They don’t know why. But this is unexpected and disturbing, Petrache’s team says. The scientists suspect it may have to do with solvents and other potentially toxic materials. These chemicals are present in the flavored liquids that are inhaled through e-cigarettes.

Petrache and her colleagues shared their new findings May 26 in the American Journal of Physiology — Lung Cellular and Molecular Physiology.

Scientists also have collected evidence of e-cigarette lung impacts from a small number of people. One study of 25 people, for instance, found that smoking cigarettes and vaping had the same short-term effects on the lungs. Both created signs of inflammation and lung damage. Scientists reported the findings in the July 1, 2014 issue of Toxicology and Applied Pharmacology.

Far more tests of vaping have taken place in animals or dishes of cells. These studies add to the growing body of evidence of harm that e-cigarettes and their flavorings may cause.

Recently, scientists at the University of North Carolina at Chapel Hill exposed human lung cells to 13 e-cigarette flavorings. Exposures lasted either 30 minutes or a full day. Five of the flavorings — hot cinnamon candies, banana pudding, kola, vanilla and menthol tobacco — affected the cells. Sometimes the treated cells no longer could replicate (reproduce) at normal rates. At high doses, these flavorings even killed the cells.

Temperance Rowell and her co-authors presented their findings on May 18 in Denver, Colo., at a meeting of the American Thoracic Society. (Members of this society focus on understanding, preventing and treating lung diseases.)

At the same meeting last year, Laura Crotty Alexander showed vaping can make it harder for the body to kill germs. Crotty Alexander is a lung specialist and scientist. She works with the Veterans Administration San Diego Healthcare System.

Crotty Alexander studied Staphylococcus aureus bacteria. Unchecked, these germs can cause pneumonia. In bad cases, they can kill. Luckily, the human body makes a material that normally can kill these bacteria.

In the lab, she exposed the bacteria to e-cigarette vapors. The idea was to create conditions like ones the germs might find in the lungs of someone who vaped. The germs responded by covering themselves with a heavier biofilm coating than normal. This gave them an extra-thick layer of protection.

Crotty Alexander then allowed mice to breathe in air containing these vaping-exposed germs. By the next day, the mice had three times as many of these germs in their lungs as did mice that had been exposed to normal Staph bacteria. Clearly, mice did not do well at fighting off the germs exposed to e-cigarette vapors.

“E-cigarettes are definitely not benign,” or harmless, Crotty Alexander concluded.

Inflamed lungs with an impaired barrier might help explain why there had been more germs inhabiting the lungs. If true, that also might explain related data that emerged earlier this year.

In that study, mice inhaled e-cigarette vapors for two weeks. Their lungs showed signs of inflammation. Later, these animals were exposed either to Staphylococcus or to flu virus. Mice with inflamed lungs were less able to fight off infection than were mice that had not vaped. Some vaping mice even died from the flu. All nonvaping mice survived.

Vaping liquids contain solvents to help flavorings dissolve into them. When heated in an e-cigarette, at least one commonly used solvent transformed into something worrisome: carbonyls (Kar-boh-NEELS), a 2014 study showed. These carbonyls included formaldehyde and other compounds that are known or suspected of causing cancer.

Other ingredients in vaping liquids also have been linked to harm. At high doses, nicotine can kill people. And the potential for accidental nicotine poisonings may be quite high around e-cigarettes. That’s the conclusion of Jennifer Cameron of the College of Nursing at Washington State University in Spokane and her colleagues.

Nicotine can be absorbed in the gut or through the skin. As little as 30 to 60 milligrams (0.001 to 0.002 ounce) of nicotine can kill an adult. A mere 10 mg may kill a child. In its new study, Cameron’s team showed that a small vial of e-cigarette liquid can contain 100 mg of nicotine. (How much a vial contained was not always reported accurately on a product’s label.) If a child or adult consumed much of what was in a vial, they could die, the team concluded. Their findings appear in the January 2014 issue of Tobacco Control.

In fact, there are few rules about what manufacturers can put into vaping fluids. Some companies label their flavored liquids as being “food grade.” Others describe those flavorings as “generally recognized as safe” for foods and drinks. However, something that may be safely eaten or drunk might be “quite unsafe when inhaled,” notes James Pankow’s team at Portland State University in Oregon.

Pankow headed a team of chemists and engineers who analyzed the flavorings and other chemicals in 30 e-cigarette solutions. Flavoring agents made up a relatively large share of the liquids, they found. Several of the chemicals, such as benzaldehyde (Benz-AL-duh-hide) can irritate the lungs. They published their findings online April 15 in Tobacco Control.

Pankow’s team warns that it could look at only a small portion of the e-cigarette liquids now available. As of January 2014, it notes, there were “an astonishing 7,764 unique flavor names” for these solutions on sale. And the researchers cite data indicating that the number of new flavors continues to grow at a rate of roughly 240 a month.

In recent years, teens have been moving away from smoking cigarettes and cigars. That’s according to new data from the latest annual National Youth Tobacco Surveys. These are jointly sponsored by two U.S. health agencies, the FDA and the Centers for Disease Control and Prevention. Results of the latest round of these surveys “are astounding and concerning,” Zeller of the FDA reported on April 16. (Part of his announcement of the survey’s findings can be heard in the video at right.) Cigarette and cigar use has been falling over the past decade. But that “good news is now being threatened by the bad news of this dramatic increase in the use of e-cigarettes,” he said.

In fact, the new surveys showed that by 2014, e-cigarettes had become the most commonly used tobacco product by middle- and high-school students. (It’s called a “tobacco” product because its nicotine comes from tobacco.)

This new trend, Zeller says, “should raise alarm bells for parents and educators.”

Nor should toxicity data be ignored by teens, warns Garry Sigman. He is head of adolescent medicine at the Loyola University Chicago Stritch School of Medicine. It’s in Maywood, Ill.

Nicotine is one of the most addictive substances available to teens, he told Science News for Students . “With only a few inhales it can create an addiction,” he says. When exposure occurs as the adolescent brain is still developing, there is a concern that the risk of addiction will be heightened, he says.

“But while addiction is our main concern, we also have other health concerns,” he notes. For instance, some liquids used in e-cigarettes have been shown to contain heavy metals, silicates and other materials. These might be toxic to the lungs. And because no government agency currently regulates vaping fluids, he says, the safety of these flavored liquids have not been well studied.

The FDA acknowledges that many questions about the safety of e-cigarettes remain. But with what’s already known, Zeller concludes, “The striking increase in middle school and high school use of e-cigarettes . . . is really a public health emergency.” 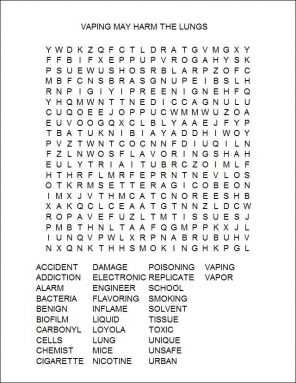