Cleaning is a lot of work. When you spill spaghetti sauce on a table, you have to wipe it up. When your clothes get dirty, you have to launder them. And when birds poop on your car, you have to scrub off the droppings.

But what if these everyday things could clean or sanitize themselves? Imagine surfaces, paints and fabrics with special cleansers built right into them. A material with such additives could disinfect itself or remove its own stains.

Some scientists are already creating such products. One team has concocted a special paint that could keep stains from sticking to cars. Another group has engineered cotton fabrics to break down dangerous chemicals. And other researchers are creating a coating to kill germs.

Scientists refer to materials with these special traits as having active surfaces. Such surfaces respond to their environment. For example, they might react with gooey residues or release specific types of chemicals.

To be active, “the surface has to do something,” explains Wendelin Stark. Stark is a chemical engineer at the Swiss Federal Institute of Technology in Zurich.

Active surfaces don’t just make life easier. They also could make it safer and healthier. For example, self-cleaning clothing could protect workers from harmful chemicals. And surfaces that kill bacteria could keep germs from spreading in hospitals.

One thing that makes active surfaces appealing is the work they eliminate. Take cars: They can get very dirty. As vehicles zoom down highways, insects splatter on their bumpers. Once they dry out, stuck-on bugs can be very hard to get off. “Even if you go through the car wash, those things still stay on top of the paint,” notes Hongfei Jia. And he knows a lot about the problem. This materials scientist works at the Toyota Research Institute of North America in Ann Arbor, Mich.

This video shows how easily starch rinses off panels painted with a polyurethane coating — but only if it contains a special “bioactive” enzyme. Credit: Toyota Research Institute of North America and University of Minnesota.

Researchers in Jia’s field study how the structure of materials at the scale of atoms and molecules relates to their overall properties. Jia and his team wondered if they could alter automotive paint to keep bugs and other residues from sticking so stubbornly.

Their solution? Enzymes. Living things make enzymes to speed up chemical reactions. Some enzymes chop other chemicals into smaller bits. In a car’s paint, enzymes might break down the chemicals that essentially glue bugs and other debris onto its surface. That should make those residues easier to wash off.

The researchers found enzymes that break down the fats, proteins and sugars that often bind stains to cars. Jia’s team selected one that digests proteins and added it to paint. Then they applied this special paint to metal panels attached to a car’s front bumper. The researchers applied regular paint to identical panels and attached these to the bumper as well.

When team members later drove the car down a highway, each panel collected lots of stuck-on bugs.

Back in the lab, the team rinsed each panel with water for five minutes. Then they counted the dead insects that remained. Washing removed only 1 in every 5 bugs that had accumulated on the regular painted surfaces. But panels coated with the enzyme-containing paint were bugfree. Jia’s team published its results earlier this year in Biotechnology and Bioengineering.

The group also tested the paint’s ability to ward off food stains. After all, people often eat in cars and spill plenty.

The researchers dropped barbecue sauce, salad dressing, mayonnaise and other foods onto painted metal panels. After letting the stains dry, they rinsed each panel with water. Food washed off of the enzyme-laced paint more quickly than it did from panels coated with regular paint.

Toyota doesn’t have definite plans yet to use this paint on its cars, says Jia. Before doing so, researchers would need to make sure the paint still works under harsh conditions, such as exposure to the sun’s ultraviolet rays.

But such paint might one day protect more than just cars, says Jia. Used in kitchens, it could make tables and counters easier to keep clean.

Gang Sun wants to make self-cleaning fabric for people who work on farms. This materials scientist works at the University of California, Davis.

Some farm workers spray chemicals onto fields to kill pests. The bugs they target attack crops. Repeated or prolonged exposure to pesticides can make these farm workers sick. Pesticide residues also can brush off of plant leaves and onto the workers who harvest crops.

Sun’s team set out to make fabric that would break down pesticides and other toxic chemicals. Wearing clothes made from such a fabric might reduce a worker’s risk from harmful chemicals — or germs.

To test that, the researchers treated fabric with a chemical called 2-AQC. (Its formal name is 2-anthraquinone carboxylic acid.) This fabric can detoxify itself by going through a few chemical reactions.

But it needs a little help from light. When light hits 2-AQC, it makes molecules called radicals. Chemically, explains Sun, these radicals are “super-active.”

Those radicals will interact with oxygen in water, present as moisture in the fabric. That reaction produces hydrogen peroxide (H2O2), a chemical similar to bleach. That hydrogen peroxide is really important. It breaks down and reduces the toxicity of chemicals, including pesticides.

To test the process, Sun and his colleagues soaked squares of cotton fabric in 2-AQC along with another chemical. The second one helped 2-AQC bind to the cotton. Then the researchers exposed this fabric and untreated cotton to a pesticide. Afterward, they shined light onto each piece of cotton for three hours.

About 90 percent of the pesticide disappeared from the fabric treated with 2-AQC. But the scientists saw no pesticide loss in their untreated fabric.

Could this treatment kill germs, too? To find out, the researchers added bacteria to treated and untreated fabric. Again, they shined light on both types. When the test was over, less than 1 percent as much bacteria remained on the treated cotton as on the untreated fabric.

And this treatment might help more than farm workers. Soldiers, for instance, might encounter harmful germs or chemicals used as weapons. Self-cleaning clothes could protect against these threats.

Stark’s team in Switzerland also has created materials that kill bacteria. But instead of using it on fabrics, his group coats these new materials onto surfaces in hospitals, such as doors.

“Going to a hospital can be quite dangerous because there are tons of bacteria there,” says Stark. In the United States alone, tens of thousands of people die each year from bacterial infections they picked up in hospitals. Covering floors, walls and doors with a bacteria-killing coating could keep these germs from spreading.

Stark knew silver can kill bacteria. Most antibacterial surfaces that use silver release a constant stream of it as tiny particles. However, these products are expensive. And eventually the released silver reacts with other chemicals and becomes inactive.

But what if the treated surface released silver only when bacteria were present? The idea is similar to a water faucet. You don’t want the tap on all of the time because “your water bill’s going to skyrocket,” says Stark. Instead, you want to turn on the tap only when water is needed.

Stark’s team decided to trick the bacteria into releasing the silver that would poison them. Bacteria must eat minerals such as calcium to grow. So the researchers made particles of calcium phosphate, a tempting snack for bacteria. Then they sprinkled on tiny particles of silver.

To test this, the chemical engineers made a paintlike substance containing the calcium phosphate particles spiked with silver. A piece of plastic coated with this material was dunked into a bacteria-filled liquid.

When the researchers tested the surface a day later, they found that just 1 in every 100,000 to 1,000,000 bacteria had survived. That’s an astounding kill rate. Hospitals in Europe are now testing the particles. Stark says they’ve begun embedding it in the top layer of plastic sheets that can be glued to surfaces.

But Stark doesn’t want to stop there. His team has devised an even craftier tactic: seeding surfaces with living germ-killers. Fungi naturally make antibiotics, or chemicals that kill germs. So surfaces containing fungi could release antibiotics as needed, the Swiss team hypothesized.

Stark’s team has shown that a surface with fungi sandwiched inside indeed can kill bacteria. Now the researchers are trying to create surfaces with many types of fungi, each producing a different antibiotic. Eventually, Stark wants the fungi to sense which bacteria are nearby and release the correct antibiotic to kill it.

The research by Jia, Sun and Stark brings us closer to a world where active surfaces do more work for us. Concludes Stark: “They make our life more simple — and safer.”

active surface A surface that responds to its environment. For example, it might perform a chemical reaction or release specific types of molecules.

chemical engineer A researcher who uses chemistry to solve problems related to the production of food, fuel, medicines and many other products.

antibiotic A substance that can destroy or inhibit the growth of microorganisms, such bacteria.

bacteria Any of a large group of single-celled organisms. Many types of bacteria produce toxic materials that can make people sick.

calcium A chemical element needed by most organisms to grow.

disinfect To clean an area by killing dangerous infectious organisms, such as bacteria.

enzyme Molecules made by living things to speed up chemical reactions.

fungus (plural fungi) Any of many organisms in the kingdom Fungi. The kingdom includes yeasts, molds and mushrooms.

hydrogen peroxide A molecule made of two hydrogen and two oxygen atoms. Highly reactive, it can kill many tiny organisms, including germs.

hypothesize To create a hypothesis, which is a testable idea to explain facts or data

materials scientist A researcher who studies the structures and properties of the substances from which things are made, such as wood, metal, plastic and glass.

molecule Two or more atoms linked together by bonds created when they begin sharing electrons. Molecules are the smallest units of chemicals.

pesticide A chemical that kills organisms considered pests, such as crop-eating insects.

protein Compounds that are an essential part of all living organisms. Proteins do the work inside a cell.

toxic Poisonous or able to harm or kill cells, tissues or whole organisms. 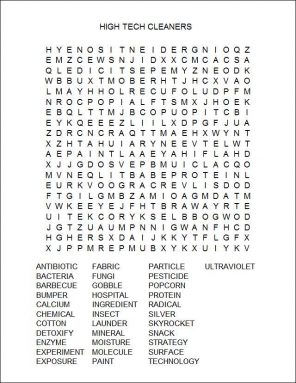