Stars glitter in the Arizona sky like a million winks. Inside the Kitt Peak National Observatory, Catherine Pilachowski zips her coat against the chilly night air. She steps up to the huge telescope and peers into its eyepiece. Suddenly, distant galaxies and stars come into focus. Pilachowski sees dying stars called red giants. She sees supernovas, too — the remains of exploded stars.

An astronomer at Indiana University in Bloomington, she feels a deep connection to these cosmic objects. Maybe that’s because Pilachowski is made of stardust.

Every ingredient in the human body is made from elements forged by stars. So are all of the building blocks of your food, your bike and your electronics. Similarly, every rock, plant, animal, scoop of seawater and breath of air owes its existence to distant suns.

All such stars are giant, long-lived furnaces. Their intense heat can cause atoms to collide, creating new elements. Late in life, most stars will explode, shooting the elements they forged out into the far-flung reaches of the universe.

New elements also may develop during stellar smash-ups. Astronomers have just witnessed evidence for the creation of gold and more during the distant collision between two dying stars.

Another team discovered the light from a long-gone “starburst” galaxy. Shortly after the universe formed, this galaxy churned out stars at an amazing speed. Special star factories like this one might help explain how enough elements built up to create the solar system.

Such discoveries are helping scientists better understand where everything in the universe got its start.

After the Big Bang

Elements are the basic building blocks of our universe. Earth hosts 92 natural elements with names like carbon, oxygen, sodium and gold. Their atoms are the amazingly tiny particles from which all known chemicals are made.

Each atom resembles a solar system. A tiny, but commanding structure sits at its center. This nucleus consists of a mix of bound particles known as protons and neutrons. The more particles in a nucleus, the heavier the element. Chemists have compiled charts that place the elements in order based on structural features, such as how many protons they have.

Topping their charts is hydrogen. Element one, it has a single proton. Helium, with two protons, comes next.

People and other living things are chock full of carbon, element 6. Earthly life also contains plenty of oxygen, element 8. Bones are rich in calcium, element 20.  Number 26, iron, makes our blood run red. At the bottom of the periodic table of natural elements sits uranium, nature’s heavyweight, with 92 protons. Scientists have artificially created heavier elements in their laboratories. But these are extremely rare and short-lived.

The universe didn’t always boast so many elements. Blast back to the Big Bang, about 14 billion years ago. Physicists think that’s when matter, light and everything else exploded out of a fantastically dense, hot mass the size of a pea. This set in motion the expansion of the universe, an outward dispersion of mass that continues to this day.

The Big Bang was over in a flash. But it kick-started the whole universe, explains Steven Desch of Arizona State University in Tempe. An astrophysicist, Desch studies how stars and planets form.

“After the Big Bang,” he explains, “the only elements were hydrogen and helium. That was just about it.” Assembling the next 90 took a lot more time. To build those heavier elements, nuclei of lighter atoms had to fuse together. This nuclear fusion requires serious heat and pressure. Indeed, says Desch, it takes stars.

For a few hundred million years after the Big Bang, the universe contained only giant gas clouds. These consisted of about 90 percent hydrogen atoms; helium made up the rest. Over time, gravity increasingly pulled the gas molecules toward each other. This increased their density, making the clouds hotter. Like cosmic lint, they began to gather into balls known as protogalaxies. Inside them, material continued to amass into ever-denser clumps. Some of these developed into stars. Stars are still being born this way, even in our Milky Way galaxy.

Converting lightweight elements into heavier ones is what stars do. The hotter the star, the heavier the elements it can make.

The center of our sun is some 15 million degrees Celsius (about 27 million degrees Fahrenheit). That may sound impressive. Yet as stars go, it’s pretty wimpy. Average-size stars like the sun “don’t get hot enough to produce elements much heavier than nitrogen,” says Pilachowski. In fact, they create mainly helium.

To forge heavier elements, the furnace must be immensely bigger and hotter than our sun. Stars at least eight times bigger can forge elements up to iron, element 26. To build elements heavier than that, a star must die.

In fact, making some of the heaviest metals, like platinum (element number 78) and gold (number 79), might require even more extreme celestial violence: collisions between stars!

In June 2013, the Hubble Space Telescope detected just such a collision of two ultra-dense bodies known as neutron stars. Astronomers at the Harvard-Smithsonian Center for Astrophysics in Cambridge, Mass., measured the light emitted by this collision. That light provides “fingerprints” of the chemicals involved in those fireworks. And they show that gold formed. Lots of it: enough to equal several times the mass of Earth’s moon. Because a similar smash-up probably takes place in a galaxy once every 10,000 or 100,000 years, such crashes could account for all of the gold in the universe, team member Edo Berger told Science News.

Death of a star

No star lives forever. “Stars have a lifespan of about 10 billion years,” says Pilachowski, an expert in dead and dying suns.

Gravity is always drawing the components of a star closer together. As long as a star still has fuel, pressure from nuclear fusion pushes outward and counter-balances the force of gravity. But once most of that fuel has burned up, so long star. Without fusion to counter it, “gravity forces the core to collapse,” she explains.

The age at which a star dies depends on its size. Small to medium-size stars don’t explode, Pilachowski says. While their core of iron or lighter elements collapses, the rest of the star expands gently, like a cloud. It swells into a huge growing, glowing ball. Along the way, such stars cool and darken. They become what astronomers call red giants. Many atoms in the outer halo surrounding such a star will just drift away into space.

Bigger stars come to a very different end. When they use up their fuel, their cores collapse. This leaves them extremely dense and hot. Instantly, that forges elements heavier than iron. The energy released by this atomic fusion triggers the star to expand yet again. At once, the star finds itself without enough fuel to sustain fusion. So the star collapses once again. Its massive density causes it to heat up again —after which it now fuses its atoms, creating heavier ones.

“Pulse after pulse, it steadily builds up heavier and heavier elements,” Desch says of the star. Amazingly, this all happens within a few seconds. Then, faster than you can say supernova, the star self-destructs in one ginormous explosion. The force of that supernova explosion is what forges elements heavier than iron.

“Atoms go blasting out into space,” says Pilachowski. “They go a long way.”

Some atoms drift gently from a red giant. Others rocket at warp speed from a supernova. Either way, when a star dies, many of its atoms spew into space. Eventually they become recycled by the processes that form new stars and even planets. All of this element-building “takes time,” says Pilachowski. Perhaps billions of years. But the universe is in no rush. It does suggest, however, that the longer a galaxy has been around, the more heavy elements it will contain.

Blast from the past

Consider the Milky Way. When our galaxy was young, 4.6 billion years ago, elements heavier than helium made up just 1.5 percent of the Milky Way. “Today it’s up to 2 percent,” Desch notes.

Last year, astronomers at the California Institute of Technology, or Caltech, discovered a very faint red dot in the night sky. They named this galaxy HFLS3. Hundreds of stars were forming inside it. Astronomers refer to such celestial bodies, with so many stars springing to life, as starburst galaxies. “HFLS3 was forming stars 2,000 times more rapidly than the Milky Way,” notes Caltech astronomer Jamie Bock.

To study distant stars, astronomers like Bock essentially become time travelers. They must look deep into the past. They can’t see what’s happening now because the light they study must first cross a vast expanse of the universe. And that can take months to years —sometimes thousands of millennia. So when describing star births and deaths, astronomers must use the past-tense.

A light-year is the distance light travels over a span of 365 days — 9.46 trillion kilometers (or some 6 trillion miles). HFLS3 was more than 13 billion light-years from Earth when it died. Its faint glow is just now reaching Earth. So what has happened in its vicinity during the past 12-billion-plus years won’t be known for eons.

But the just-arriving old news on HFLS3 did offer two surprises. First: It turns out to be the oldest starburst galaxy known. In fact, it is almost as old as the universe itself. “We found HFLS3 when the universe was a mere 880 million years old,” says Bock. At that point, the universe was a virtual baby.

Second, HFLS3 didn’t contain just hydrogen and helium, as astronomers might have expected for such an early galaxy. While studying its chemistry, Bock says his team discovered “it had heavy elements and dust that must have come from an earlier generation of stars.” He likens this to “finding a fully developed city early in human history where you were expecting to find villages.”

Steve Desch thinks HFLS3 might help answer some important questions. The Milky Way galaxy is some 12 billion years old. But it doesn’t make stars fast enough to have created all of the 92 elements present on Earth. “It’s always been a bit of a mystery how so many heavy elements built up so fast,” says Desch. Maybe, he now suggests, starburst galaxies are not all that rare. If so, such high-speed star factories might have given the creation of heavy elements an early boost.

By about 5 billion years ago, stars in the Milky Way had generated all 92 elements now present on Earth. Indeed, gravity pulled them together, packing them into a hot cosmic stew that together would eventually coalesce to form our solar system. A few hundred million years later, Earth was born.

Within the next billion years, the first signs of life on Earth appeared. No one is exactly sure how life here got its start. But one thing is clear: Elements that formed Earth and all life upon it came from outer space. “Every atom in your body was forged in the center of a star,” observes Desch, or from collisions between stars.

If the elements responsible for life on Earth started off in space, might they also have triggered life somewhere else?

No one knows. But that’s not for lack of trying. Whole organizations, like an institute focused on the Search for Extraterrestial Intelligence, or SETI, have been scouting for life beyond our solar system.

Desch, for one, doesn’t think they’ll find anyone else out there. He mentions a famous graph. It shows that planets can’t form until there are enough heavy elements. “I saw that graph, and in an instant I understood that we really may be alone in the galaxy, because before the sun there weren’t that many planets,” Desch says.

He therefore suspects that “Earth may be the first civilization in the galaxy. But not the last.” 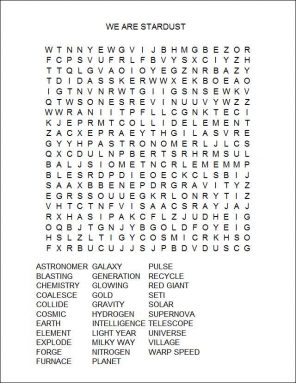