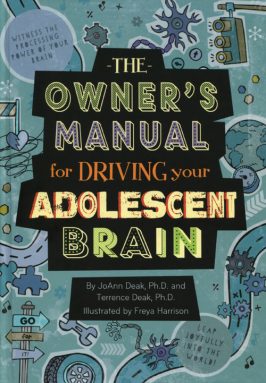 Being a teenager can be a tough experience. Thankfully, there are many books that help explain the changes that adolescents will go through on the road to adulthood. Many helpfully prepare pre-teens for acne, growth spurts and the sudden emergency of body hair in new places. But while most of these books have a lot of advice to address the changes reflected in the mirror, relatively few have had much to say about how to handle the shifts that are about to take place deep inside the brain. Until now.

The Owner’s Manual for Driving your Adolescent Brain by JoAnn Deak and Terrence Deak, helps pre-teens and teens understand what’s going on as their brains head toward adulthood. With cartoon illustrations by Freya Harrison and modern analogies that compare brain cells to iPods, this owner’s manual is far more interesting than the one that comes with your first car.

The Deaks offer 9- to 12-year-olds an easy intro to neuroscience — the how and why of the brain. It begins with explaining what the brain is made of. The authors then move on to discussing how a teen’s brain morphs as it moves through adolescence, becoming capable of more complex tasks. Finally, the authors conclude with useful advice to help teens protect, nurture and grow their brains.

With sections on emotions, creative expression and even sleep, the book is a good beginner’s guide to the working brain. There is a large and helpful glossary for tough scientific terms. The cartoon illustrations also help young readers grasp complex ideas. The tone is brisk and fun, without talking down to pre-teens. The book even offers an ice cream experiment to try at home, a delicious way to learn about your senses of taste and smell.

The authors include a section at the end of the book with Internet addresses where kids can learn even more about the brain. Unfortunately, this list is not very extensive. A bigger list of resources, aimed especially at pre-teens and adolescents would be more helpful. As a start, I recommend Science News for Students (such as The teenage brain) and the National Institute on Drug Abuse site for teens.

Overall, the Owner’s Manual is a fun and interesting guide to the adolescent brain. And while young teens might be the target audience, it’s possible their parents might also pick up some important insights as well.

adolescence  A transitional stage of physical and psychological development that begins at the onset of puberty, typically between the ages of 11 and 13, and ends with adulthood.

neuroscience  Science that deals with the structure or function of the brain and other parts of the nervous system. Researchers in this field are known as neuroscientists.