Earth moves constantly. It spins on its axis. It orbits the sun. Parts of Earth even move from the inside out — constantly changing our planet’s surface.

For billions of years, Earth has been remodeling itself. Huge masses of rock rise from deep inside Earth, travel along its surface and then sink back down. The process is known as plate tectonics.

We rarely see those changes as they happen. Yet plate tectonics affects everyone. It influences climate. It can trigger earthquakes or volcanic eruptions. Plate tectonics even shapes continents. But scientists still don’t know all the details of how Earth alters its surface.

Several studies have just turned up new and important details. One uncovered a thin “jelly layer” of liquid rock that helps Earth’s plates glide. Another found the first direct evidence that plate tectonics has been reshaping our planet’s face for more than 2.5 billion years.

The word tectonics comes from a Greek word meaning “to build.” Tectonic plates are huge moving slabs that together make up Earth’s outer layer. Some span thousands of miles. In all, a dozen major plates cover Earth’s surface.

You might think of them as the cracked eggshell jacketing a hard-boiled egg. What’s more, “tectonic plates are very hard,” notes Samer Naif. He’s a geologist at the Scripps Institution of Oceanography. It’s at the University of California, San Diego.

Like an eggshell, plates are relatively thin — on average only about 80 kilometers (50 miles) thick. An hour’s drive on a freeway will take you about as far.

But unlike an egg’s cracked shell, tectonic plates travel.

“The great pressures down there cause the rock to be solid, even though it is very hot,” explains Clint Conrad. As a geophysicist at the University of Hawaii at Manoa, he studies how energy and forces shape Earth.

Nestled inside the mantle is a core that’s even denser and hotter. It’s analogous to a hard-boiled egg’s yolk. The core’s outer region is liquid. Its center is mostly solid iron.

Earth’s innards are always moving around. That’s because warmer materials are generally less dense than cooler ones, notes geologist Mark Behn. He’s at the Woods Hole Oceanographic Institution in Massachusetts. So, hot stuff in Earth’s middle “rises up — kind of like a lava lamp,” explains Behn. “Once it gets back to the surface and cools off again, then it will sink back down.” Scientists refer to this temperature-propelled movement as convection.

The rising of hot rock from the mantle to Earth’s surface is called upwelling. This process adds new material to tectonic plates.

In a June 2013 study in Nature, Conrad and other researchers found massive, extra-hot regions of mantle beneath Africa and the central Pacific Ocean. The scientists concluded these were major areas of upwelling. “These two areas remain in the same place as the tectonic plates drift around on the surface above them,” explains Conrad.

Upwelling happens at many other places on Earth. However, those other areas are smaller and involve just the upper mantle. “The Africa and central Pacific upwellings extend all the way from the lower mantle to near the surface — nearly 3,000 kilometers,” notes Conrad. (That’s about 1,865 miles.)

Over time, the cooling outer crust becomes thicker and heavier. After millions of years, the oldest, coolest parts of the plate sink back into the mantle. Sinking happens hundreds or thousands of miles away from regions of upwelling. That’s because over those millions of years, parts of the plate that rose up have shifted. The sinking rock pulls on the rest of the plate. The plate’s younger, opposite edge moves a bit. This makes room for more hot rock to rise up from the mantle.

“It’s like a giant conveyor belt,” explains geophysicist Kerry Key, also at the Scripps Institution of Oceanography. The plates’ average speed is about 2.5 centimeters (roughly an inch) or so per year — about as fast as your fingernails grow. Over millions of years, though, those centimeters add up.

So over eons, Earth’s surface has changed a lot.

For instance, roughly 250 million years ago, Earth had one giant landmass: Pangaea. Within some 50 million years, the plates under that land and the ocean moved. Plate movement split Pangaea into two huge continents, called Laurasia and Gondwanaland. As Earth’s plates kept moving, those landmasses each broke apart more. As they spread and traveled, they evolved into our modern continents.

Plates continue to glide slowly across Earth’s mantle. As the plates move, expect the future placement of continents and oceans to become completely reshuffled, says Behn. For instance, “The Atlantic Ocean will open and close over cycles of 300 million to 500 million years.”

In March 2013, Key, Naif and other researchers discovered a detail about how massive plates move. A partly melted “jelly layer” lubricates the plates, almost like grease. They described their observations in the research journal Nature.

To get data, the scientists lowered oven-sized sensors onto the Pacific Ocean floor. They deployed the first of them about 3,200 kilometers south of San Diego. That’s where the Cocos plate rises from the mantle. The team put more sensors hundreds of kilometers to the east. There, off Nicaragua’s coast, the Cocos plate sinks back down.

Those sensors collected data on how well areas under the ocean floor conduct electricity. After several weeks, a crane lifted the sensors back up. Then the researchers studied the data.

In general, melted or partly melted areas carry electric current better than solid ones. The researchers concluded that the areas that were most conductive were at least partly melted. One of those areas was where new plate material rose from the mantle.

Scientists had expected that. As material rises from the mantle, there’s less pressure. Reduced pressure lowers the temperature at which something melts. A similar concept explains why bubbles form when you open a bottle of some carbonated beverage.

Scientists also found a highly conductive layer of rock under the portion of the plate where it was sinking. To Naif and Key, this indicates that the rock layer is partly melted.

That layer is barely 25 kilometers (16 miles) thick. Imagine a loose-leaf binder standing next to the Washington Monument. That’s how thin the partly melted layer is compared with Earth’s average diameter of about 12,700 kilometers.

The semi-melted layer seems to be greasing the top of the mantle. As a result, the plate above it can slide fairly easily. “It’s just like the jelly in a peanut butter and jelly sandwich,” explains Naif.

Suppose you spread peanut butter on one piece of bread and slap another slice on top. Push gently on either piece and the bread barely budges. But smear jelly on one slice and peanut butter on the other, and everything changes. Now the top half of the sandwich slides easily across the bottom.

Scientists aren’t sure what caused the partial melt layer. After all, a plate sinks because it’s cooler and heavier.

But Naif and Key offer one possibility: Water dissolved in the uppermost mantle might lower the rock’s melting temperature. The same idea explains why ice with salt in it melts at a lower temperature than does ice made from pure water.

What happens after plates sink back down? Scientists have just found the first direct evidence that at least some sinking rock eventually cycles back up to Earth’s surface.

Rita Cabral is a geochemist at Boston University in Massachusetts. Her team found a unique chemical signature in sulfur-containing rock samples from the island of Mangaia. Part of the South Pacific’s Cook Islands, it was formed by volcanoes.
A chemical signature is like a fingerprint. In this case, it shows that the island’s sulfur underwent a chemical process known only to have happened early in Earth’s history. Basically, sunlight triggered a chemical reaction in the atmosphere that involved sulfur.

“This happened in the Earth’s atmosphere before 2.5 billion years ago,” says Cabral. After that time, a protective oxygen layer, called the ozone layer, prevented the reaction.

The researchers believe the sulfur must have fallen through the atmosphere and eventually settled onto the ocean floor. There, it would have become part of the rocks, says Cabral. Eventually, those rocks would have travelled and sunk along with the tectonic plates beneath them.

Finding this type of sulfur at a young volcanic island must mean that it is erupting ancient material, Cabral concludes. “This is the first direct evidence that there is a cycle of crust starting at the surface and going into the Earth and coming back out again.”

It also means, Cabral says: “Plate tectonics must have started before 2.5 billion years ago.” In April 2013, Cabral’s team published its discovery in Nature.

Moving plates can trigger huge impacts. “All the action is mostly at the edges,” notes Anne Egger. She’s a geologist at Central Washington University in Ellensburg.

Tectonic plates interact in different ways. Colliding plates can crush against each other. Abutting edges rise as mountains. “It’s like pushing against the edge of a rug,” notes Egger. Asia’s Himalayas formed this way.

If one plate is denser and heavier, however, it can slide beneath the other. That builds mountains too. Think of how your foot pushes up under a blanket. Washington’s Cascade Mountains rose up in this way.

Volcanoes can form too when one plate slides under another. Hotter temperatures can release water from the lower plate. That hot water can mix with rock in the top plate and melt it. Then that molten rock might shoot to the surface. Mount St. Helens and Mount Rainier — part of the Cascades — formed this way.

Upwelling also can create volcanoes. For instance, melted rock rising from the mantle formed Iceland’s volcanoes. A combination of upwelling and sinking plates explains the volcanoes around the Pacific Ocean’s rim. People often call it the “Ring of Fire.”

Volcanoes and earthquakes can cause massive destruction. The more scientists learn about plate tectonics, the better they can understand these phenomena. If scientists could warn people when these events were coming, they might help limit damage.

Meanwhile, big questions remain. For example, how exactly do rocks get recycled after plates sink down? And how big is the partly melted rock layer that Naif and Key found? Might it extend beneath the entire plate?

“We don’t know,” says Key. But he and other scientists want to find out. “We want to connect the dots.” 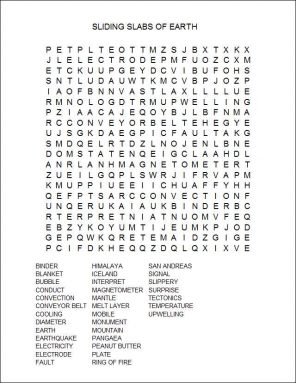