In the Pacific Ocean north of Australia, a tiny speck of land called Kimbe Island is surrounded by coral reefs. This tropical island is so small that you can swim around it in half an hour.

Baby fish in the ocean must find islands like Kimbe so they can make their homes on neighboring reefs. To navigate, the animals rely partly on their sense of smell. These young fish, only about the size of a raisin, swim toward the scent of leaves from the islands’ trees. That’s like finding your way home by following the smell of flowers in your yard.

For fish, finding the right home is not the only activity that requires a good sense of smell. Fish also detect odors to find food, avoid predators and prepare for mating. Recently, scientists discovered that certain environmental changes can endanger the sense of smell in fish. People are dumping pollutants into lakes and rivers. Gases released by cars and factories are changing the ocean’s chemistry. Such chemical changes may affect fish and other water-dwelling creatures in ways that alter or eliminate an animal’s recognition of important smells.

That means some migratory animals might never find their way home. Others may have a hard time reproducing. Perhaps most disturbing, some animals might not detect the scent of danger — and pay for it with their lives!

Like people, fish have noses. Water flows through holes called nares into two chambers. Each chamber contains a rose-shaped structure called a rosette. Odor molecules stick to cells on the rosette called neurons. Those neurons then shoot a quick signal to the brain. That’s how a fish detects a scent.

Because these neurons are exposed to the environment, they are very sensitive to changes. Any chemicals in the water may affect the nose.

For example, people have released a lot of copper into the environment. Copper comes from factories, houses, pest-killing chemicals and car brakes. Rain washes that copper into rivers.

That copper can rob fish of their sense of smell. Some may then fail to detect the characteristic whiff that signals a predator may be lurking nearby.

That danger scent is a chemical in a fish’s skin called “Schreckstoff.” The German word roughly translates to “scary stuff.”

When a predator bites into its prey, breaking the skin, Schreckstoff will be released. Other fish should recognize the dreaded scent and quickly realize a predator has attacked a neighbor. This will normally prompt the survivors to freeze in place, making it harder for the predator to see them.

But copper can change that.

In one study, scientists put some salmon in tanks of water containing copper and other salmon in tanks without copper. Next, the researchers transplanted the fish into an aquarium and squirted in Schreckstoff. Fish from copper-free tanks froze and sank to avoid predators. But salmon that had been exposed to copper tended to keep swimming.

Jen McIntyre is a scientist at Washington State University Puyallup Research and Extension Center who studies the effect of pollutants on aquatic organisms. She wanted to test whether these copper-exposed fish were also more likely to get eaten by predators.

So she put some salmon into small tanks containing water with copper. Later, she transferred these fish into a large tank and added Schreckstoff to “warn” the salmon that predators might be nearby. Finally, she released cutthroat trout, a type of fish that eats salmon, into the large tank. McIntyre also repeated the experiment with fish that hadn’t been exposed to copper.

Salmon that had been exposed to copper swam around more. And as expected, the trout attacked and caught them faster. It appears, McIntyre says, that the copper-exposed salmon “really just didn’t know what kind of danger they were in.” They just weren’t prepared.

These tests demonstrate that a poor sense of smell can mean life or death for some animals. Many salmon populations in the western United States are already dwindling. Scientists are starting to worry that copper pollution could make it hard for these fish to recover.

In addition to dumping chemicals in rivers and lakes, human activities have altered the chemistry of the oceans. Traffic and manufacturing are among sources that emit a gas called carbon dioxide, which is absorbed by the ocean surface.

The more carbon dioxide the ocean takes up, the more acidic the water becomes. (Acidity is a property describing the level of hydrogen ions in a solution. For example, lemon juice is more acidic than bleach.)

Philip Munday, a marine biologist at James Cook University in Townsville, Australia, wondered whether ocean acidification might affect a fish’s ability to detect odors. A coworker, Danielle Dixson, was already studying how baby clown fish use smell to find reefs near tropical islands. She discovered the scent of tropical plant leaves, which fall into the water above the reefs, attracts these fish.

Next, Dixson set up a long chamber called a flume. Two streams of water run through it, and fish can choose to swim in either stream. Because the two streams move at the same rate and in the same direction, they don’t mix. In one experiment, she scented the water of one stream with the tropical plant leaves. In a second experiment, she substituted the swamp tree’s scent.

Clown fish raised in normal seawater swam in the tropical leaf–scented stream almost all the time; they clearly avoided the stream that carried the swamp tree smell. But fish raised in more acidic water weren’t as picky. They were about as likely to choose the stinky water as the water with the attractive scent. “The fish just start to like everything,” explains Dixson.

More worrisome, clown fish raised in acidified water failed to respond appropriately when they encountered the scent of fish called rockcod and dottyback. Both species eat clown fish, so their scent should send clown fish fleeing. But in the flume, fish raised in acidified water spent all their time swimming in the predator-scented stream — not the unscented water. That’s like preferring to walk down the middle of a busy highway instead of on the sidewalk.

These studies told the scientists that the fish hadn’t lost their sense of smell — they just could no longer tell “good” from “bad” odors. “They can still smell but make the wrong decision,” concludes Munday.

Further studies revealed even more odd behavior in fish exposed to acidified seawater. Clown fish raised in such waters didn’t swim away from sounds suggesting dangerous predators were nearby. And damselfish took more risks when placed in natural reefs, swimming farther from their homes and getting gobbled up more often by predators.

Munday’s team wondered if something was wrong with the fishes’ brains, not just their noses. That might explain the many oddities in their behavior.

Göran Nilsson, a researcher at the University of Oslo in Norway who studies how fishes’ bodies work, had an idea. He knew that many animals have a chemical in their brains called GABA. GABA signals brain cells to open the gates to channels in the outside walls. When the gates open, chemicals called chloride and bicarbonate flow into the cell. When this happens, the cell becomes less active.

But Nilsson wondered whether acidified water somehow changed the chemistry in a fish’s body so that the flow of chemicals through those gates reversed. Maybe chloride and bicarbonate would flow out of brain cells, instead of into them, when GABA signaled the cells to open their gates. This could confuse the fish in such a way that they now swam toward the smell of a predator instead of away from it.

To test the idea, Nilsson found a drug that makes the brain cells’ gates open less frequently. In fish raised in acidified water and exposed to the drug, the number of “backward” signals in their brains should diminish. And that’s exactly what the scientists observed. When they placed these fish in a flume with unscented and predator-scented water, the fish responded normally again. They avoided the predator’s scent. This test confirmed that the problem with smell processing occurred not at the nose but in the animal’s brain.

Acidifying ocean water can place other aquatic animals, such as crabs, in trouble as well — perhaps partly by messing with their sense of smell.

Kate de la Haye tested whether acidifying water affects how a hermit crab chooses its shell. These crabs use the shells of dead snails to protect their soft lower bodies, explains this marine biologist at Plymouth University in England. The animals rely on smells to find shells. Once they get close, they rely on touch and sight to choose the best shell.

In the lab, de la Haye’s team took away shells that the hermit crabs had chosen to carry and offered them shells that were way too small. The crabs had no choice but to use the uncomfortably small shells. The researchers then exposed some crabs to acidified water. Next, the researchers put each crab near a shell that was just the right size.

Crabs kept in normal water frequently flicked their antennae, which is what crabs use to “smell,” and usually swapped their too-tiny shell for the bigger one. Many of the crabs kept in acidified water didn’t adopt the new shell, even though it would improve their chances of survival. These crabs also flicked their antennae less, suggesting that they weren’t detecting as many scents. (The new shells were still close enough for many of the crabs to find them. But in the wild, they might not have if the shells were farther away.)

She doesn’t yet know whether acidity is blunting the crabs’ sense of smell, diminishing their ability to process scents, sapping their energy or some combination of all of these things. Scientists also don’t know whether pollutants, such as copper, affect a fish’s processing of smells in the same way that acidity does. For example, copper might simply bind to cells on the nose and block odors.

But whatever the cause, failing to detect and respond correctly to scents could put fish and other aquatic animals in serious trouble. For fish, a sense of smell is completely indispensable, says Keith Tierney, a scientist at the University of Alberta in Edmonton who studies the effects of pollutants on animals. “They have to have it.”

Young salmon that have been exposed to copper respond differently to the scent of an alarm signal that tells them a predator is nearby. In this video, normal fish (shown in the top two panels) freeze and slowly sink when they smell the alarm signal, so it’s harder for predators to spot them. But copper-exposed fish (shown in the bottom two panels) keep swimming as if there’s no danger. Credit: David Baldwin, NOAA Northwest Fisheries Science Center.

rosette Part of a fish’s nose. The rosette is a rose-shaped organ that binds odor molecules and transmits signals to the brain.

pollutant A harmful chemical released into the environment.

flume A narrow channel with water flowing through it.

acid A chemical that increases the level of hydrogen ions in a solution.

carbon dioxide A gas made of one carbon and two oxygen atoms. 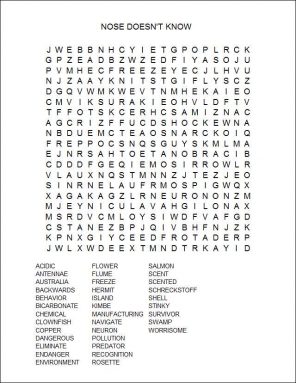