PHOENIX, Ariz. — Concrete is the most common artificial material on the planet. It’s used to make roads, bridges and dams. It anchors fence posts and makes durable outdoor stairs. Chances are, concrete forms the foundation of the building you live in. Humans use billions of tons of it each year. That’s enough for each man, woman and child on Earth to have their own personal concrete cube measuring 1.5 meters (nearly 5 feet) across. So it’s little wonder that this building material is the focus of much research, even among teens.

The idea of concrete as a research topic may seem drab and low-tech. After all, it’s been in use since ancient Rome. Yet finding new or better uses for a material, or a better way to make it, is what engineering is all about.

And doing that with concrete brought finalists from three nations to compete at the world’s largest teen science competition. This International Science and Engineering Fair (ISEF) was created by Society for Science & the Public and sponsored by Intel. The 2016 competition brought together more than 1,750 students from 75 countries. (The Society also publishes Science News for Students.) The teens described their research here on May 12.

One of the teams looked at how to reduce the environmental footprint of concrete. Its solution was to use seawater rather than freshwater, which might be better saved for drinking. Another team investigated ways to make concrete safer by making it glow in the dark. The third project focused on a possible use for concrete rubble, which is generated by the renovation or destruction of old buildings or roadways.

Together, these projects show that topics don’t have to be glitzy to yield important results.

Concrete is typically made by mixing together several materials. The largest part of this composite material is a binder called cement. It’s made by first heating limestone and clay to very high temperatures. Then, people add small amounts of other minerals before grinding the mix into a powder. They add freshwater  to turn the cement into a slurry. Then they add other ingredients such as gravel and sand. The slurry gradually hardens and binds the other ingredients  together. Engineers can further strengthen concrete by adding steel rods. These reinforcing bars are often called “rebar” for short.

Making concrete requires a lot of water. But freshwater is a precious resource in many parts of the world. In many arid locations, drinking water comes not from wells but from seawater that has been treated to remove the salt. That’s especially true in some coastal parts of the Middle East, notes Abdulrahman Mohammed, 18, and Ahmed Elhamamsi, 16. Both attend Ahmad Bin Hanbal Secondary School in Najma, Qatar. Qatar (which somewhat rhymes with the English word “gutter”) is a small oil-rich nation on the shores of the Persian Gulf. Seawater is readily available there. Freshwater, not so much.

Abdulrahman and Ahmed wanted to see what happened if they substituted seawater for freshwater in concrete. So they mixed up samples of each and then compared them. To a few of the samples, they also added a powdered clay mineral called metakaoline (MEH-tah-KAY-oh-leen). (It’s a dehydrated version of the clay mineral used to make porcelain and fine china.)

The teens’ early results are encouraging. Concrete with both metakaoline and seawater appeared to be stronger than that made from the traditional recipe. It resisted about 10 percent more crushing pressure than did the regular stuff. Their data now suggest that in some cases engineers could substitute smaller amounts of concrete made from the new recipe to carry the same load as concrete made with freshwater.

Concrete made with seawater could potentially solve another common problem. In areas where freezing temperatures are common, rain and snow can soak into its surface. When that water freezes it expands. That can cause concrete to weaken over the course of many winters. But concrete made from seawater was about 4 percent less permeable. That means smaller amounts of rain would soak into its surface, the teens note. (Temperatures never drop below freezing in Qatar, but they certainly do in many other places.)

Further tests will be needed to make sure concrete made with seawater doesn’t suffer long-term problems, the teens say. For example, salts and other minerals dissolved in the water might cause any rebar inside the concrete to corrode.

Seawater-based concrete could be a boon for Qatar, the boys say. In 2022, their nation will host the World Cup soccer tournament. That means there will soon be a lot of construction in the country (which is about twice the size of the state of Delaware).

A lot of concrete goes into making roads. Each year in the United States, about 1.5 million traffic accidents occur when drivers hit animals crossing the road at night. But some of those accidents might be prevented if animals could be seen more clearly against the background. That was just one motivation for the glow-in-the-dark cement created by two students at Saint Joseph’s Academy in Baton Rouge, La.

Aniko Nowakowski, 18, and Meredith Guidry, 17, made concrete glow by creating a coating that could be painted onto a road’s exposed surface.

The glow comes from a compound called strontium aluminate. (Its formula is SrAl2O4.) The chemical is phosphorescent (FOSS-for-ESS-ent). That means it absorbs certain wavelengths of sunlight, then re-radiates them as visible light once the sunlight is removed. The glow-in-the-dark coating can be chemically tweaked with different additives to make it give off blue, green or blue-green light. The material can glow for hours after only 20 minutes in full sunlight. It’s still glowing at dawn, although only about half as brightly as at sundown, the teens say.

Aniko and Meredith made a number of different coatings and assessed each one for brightness and durability. The ideal combination should give off plenty of glow but not be worn away quickly by traffic.

In some of their coatings, the teens used large granules of strontium aluminate. In others, they added it as a fine powder. Initially, they thought that the powdered material might mix into the coating better. Plus, powdered strontium aluminate would provide much more surface area per ounce than the larger granules. That also might mean more light.

Their tests showed that the brightest glow came, in fact, from a recipe in which large granules of strontium aluminate were mixed into a paint-like epoxy. The second-brightest combination was the powdered material mixed with a tough sealant. This recipe also held up much better to wear  than did the epoxy. So the teens concluded that the sealant-based coating might be the best overall choice among the options they tested.

Such coatings could be used in a wide variety of places. A glow-in-the-dark coating could clearly mark parking spots or the edges of driveways. It could decorate patios or poolside surfaces. Hospitals and other public buildings could use the material to highlight safe evacuation routes in case of a power failure. Indeed, the teens argue, the potential benefits of glow-in-the-dark concrete are mind-boggling.

Durability remains one of concrete’s biggest appeals. The Romans built concrete structures almost 2,000 years ago that still stand today.  These include the Colosseum. But even things made of concrete can wear out, be damaged or outlive their usefulness.  And that old concrete tends to end up as rubble — a large and long-lived waste.

Each year in the United States alone, construction projects and demolition generate about 181 million metric tons (200 million short tons) of waste concrete. About 70 percent of that waste will be recycled to make more concrete. But that leaves more than 54 million metric tons of unrecycled rubble. Much of that gets thrown into landfills.

What if more rubble could be recycled? And what if that recycling got rid of another big environmental problem at the same time? Those were questions asked by Brynn Cauldwell. This 17-year-old attends St. Stithians Boys’ College in Sandton, South Africa.

The environmental problem that interested Brynn was how to limit mining operations from poisoning nearby ecosystems. It’s a problem especially when the material being mined (such as coal) includes minerals containing sulfur.

And the problem often gets worse when a mine closes. It can lead to what is known as acid mine drainage. This descriptive term refers to the highly acidic waters that drain from a mine or that run off of mined materials that have been discarded in piles nearby.

When water washes over these mine wastes it dissolves the sulfur-bearing minerals. That creates strong acids that mix with the water and make it highly acidic.

In turn, the  acidic water often dissolves toxic heavy metals present in rocks. This runoff flows downhill into the nearest stream. There, and in areas further downstream, these poisons snuff out living organisms. Fish and other creatures can be replaced by slimy globs of acid-tolerant microbes known as extremophiles (Ex-TREEM-oh-fyles).

Brynn realized that concrete could be a potential solution to this problem. Acids can dissolve the cement that binds concrete together. That cement includes alkaline materials. When it dissolves, it releases acid-neutralizing ions. This process also creates water, which further dilutes the acid.

Brynn’s tests confirmed that his idea works. But he has not yet used actual mine drainage. Instead, the teen used a strong solution of hydrochloric acid. He ran the acidic solution through a container full of concrete rubble over and over again. As the cement in the concrete began to dissolve, the acid got weaker and weaker. Eventually the solution’s acidity dropped to a point where it was no longer a threat.

Acid mine drainage also tends to contain toxic metals. If Brynn had used it, extra steps might have been needed to remove them from the water, he notes. But eventually, the water should emerge from this system clean enough to irrigate crops, he says. “By combining two wastes, we could end up with something useful,” he concludes.

Not only that, says Brynn, but the sand and gravel left behind after the cement dissolved could be reused to make fresh batches of concrete. That’s less material sent to landfills — recycling at its best.

The widespread availability of concrete, as well as its low cost, renders it a popular topic for teen research. The projects above were three of several concrete-related projects that earned their way from local competitions to the Intel ISEF finals. And if you think these projects are impressive, you’re right. Abdulrahman and Ahmed received $1,000 for their research. It was provided by the King Abdulaziz and his Companions Foundation for Giftedness and Creativity. That group is based in Riyadh, Saudi Arabia. Brynn took home $3,000 worth of stock in United Technologies Corporation, a company based in Farmington, Conn.

Teens in other science competitions have investigated concrete for their studies too. Take, for instance, Augusta Uwamanzu-Nna of Elmont Memorial High School in New York. In her case, she focused on improving the cement used as a binder. This project won the high school senior a finalist’s spot in the Intel Science Talent Search (another SSP program) this past March.

Augusta was turned on by the idea of innovation — even in something as apparently simple as cement. “I was motivated by the need to implement sustainable measures into the cement and concrete industry,” the teen says. She showed that by adding tiny clay particles to its recipe, liquid cement will flow better. And that, she says, might one day help prevent disasters like the Deepwater Horizon oil spill.

One measure of recognition for the value of her findings: This spring the young researcher was accepted into every Ivy League school. She’ll begin her studies at Harvard this fall. 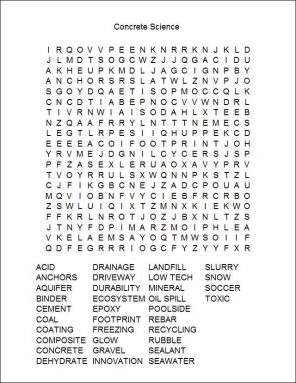