PHOENIX, Ariz. — Four teens set out to study what turns mealworms into plastic eating powerhouses. The right worm could munch through a plastic mountain, they found. But all worms aren’t the right ones. Another surprise: Bigger isn’t always better.

The high-school students showed off their results here, last month, at the Intel International Science and Engineering Fair. Created by Society for Science & the Public and sponsored by Intel, this year’s competition brought together more than 1,750 students from 75 countries. (The Society also publishes Science News for Students.)

Mealworms are the larvae — the immature form— of the darkling beetle Tenebrio molitor. In 2015, scientists showed that the guts of these worms host bacteria that can break down polystyrene plastic. It’s the type that makes up Styrofoam.

To the teens, those data suggested the worms could be a way to get rid of the plastic that takes up so much space in landfills. So they designed science fair projects to study just how much plastic mealworms could eat. Along the way, they also probed which of the worm’s bacteria do the job and whether those microbes might produce their own pollution in the process.

“I’m one of those people who’s always picking up trash and throwing it away,” says Katee Hughes, 16. She’s a junior at Bonneville High School in Washington Terrace, Utah. But over time she began to wonder just how much these tidying habits really helped the environment. So she did a bit of homework. When she threw discarded plastic into the trash, it would get dumped into a landfill and buried, she learned. And it would not quickly decompose. Instead, it would sit. And sit. And sit some more. Plastic trash can take anywhere from 10 to several hundred years to break down, studies have shown.

When she found out about the plastic-munching skills of mealworms, Katee decided to see if they might be harnessed to get rid of litter. She obtained 1,500 of these larvae and divided them evenly into 15 containers. Each set of three containers got a different type of plastic. Some mealworms got to eat a 0.7 gram (or 0.02 ounce) piece of a plastic water bottle. Others got a 0.03 gram (or 0.001 ounce) piece of a plastic bag, a 2 gram piece of a milk jug, 1 gram of Styrofoam or 3 to 4 grams of a plastic fork or spoon.

Heartened by her results, Katee now is launching a trial of mealworms at her local landfill. After setting aside an area there for the worms, Katee will slowly start adding plastic.

The teen dreams of a system where one day “people could just take their plastic to a local high school, university or town hall,” for a mealworm-based composting system.

But why stop with one kind of worm? wondered Joseph Galasso, 15. The home-schooled sophomore from Tucson, Ariz., decided to look at the plastic-munching abilities of mealworm relatives. “If they were closely related, they might be able to do the same thing,” he reasoned — and maybe even better.

Joseph hit on the superworm— the larvae of Zophobas morio. It’s another species of darkling beetle. This critter is super-sized. While mealworms are about 1.5 centimeters (or about 0.5 inch) long, superworms can reach up to four times that size, 6.3 centimeters long. Both larvae are available in pet stores, where they usually are sold to feed people’s lizards and frogs.

The teen started simple. He took 300 superworms and fed them 10 grams (0.3 ounce) of Styrofoam. He let the worms gnaw away for two weeks. They ended up eating about 2.7 grams, or a little more than a quarter of the plastic.

But Joseph knew that the worms wouldn’t be digesting the Stryofoam on their own. Instead, mealworms (and superworms) rely on gut bacteria to break down the plastic. So the teen opened the guts of 100 superworms and smeared the contents onto Petri dishes — shallow plastic dishes — that he had covered in Styrofoam. He then waited to see what happened.

When bacteria eat, they pick up carbon and hydrogen from the molecules in their food . Styrofoam is made of long chains of carbon atoms with many hydrogens attached to them. Any of the bacteria that could use those chains as food would grow on his Styrofoam-covered Petri dishes. Those that couldn’t digest the plastic, wouldn’t grow.

After eight days, Joseph ended up with a whitish growth on his plates. This was a colony of bacteria. In a nearby lab at the University of Arizona at Tuscon, he used a machine that could read the microbes’ DNA — the long molecule that carries species-specific instructions. The machine gave the teen a short genetic sequence — a string of instructions. It helped him figure out which species of bacteria it came from.

The teen hopes that his superworms might become another solution to the plastic problem. “They are easy to raise,” he says.

But which is better at eating plastic: mealworms or superworms? Haley Rust, 17, and Alexander Rodriguez, also 17, decided to test that. They assumed the much larger superworm would prove the winner, Alexander recalls.

Just to be sure, they performed an experiment. Using mealworms from their classroom’s colony, they placed 5 into each of 18 containers. They purchased superworms from a supply company and, due to their larger size, put just three into each of 18 other containers. Three containers of each type of larvae got purple compact Styrofoam — the plastic often used to insulate walls. Another group of three containers got thick white Styrofoam, the type used to pack boxes. A third set got Styrofoam packing peanuts. Other groups of the larvae were fed bean-bag beads or the modeling foam purchased at arts-supply stores.

After three weeks, the smaller mealworms had outperformed the superworms. It didn’t matter what type of Styrofoam they had been fed. While five mealworms could eat a gram (0.03 ounce) of plastic in two days, the superworms didn’t eat that much in a week.

But eating plastic might leave toxic residues in the diners. So these teens decided to test that, too. After the worms had eaten Stryofoam dinners for three months, Hayley and Alexander fed some of these larvae to 25 different centipedes. Then they waited a week to find out if the centipedes died from dining on plastic-fed mealworms. None did. This means the worms are probably all right for the next step up in the food web, Haley concludes. Still, she adds, “Further research would need to be done to see if they were toxic to things like birds.”

Dining mealworms produce wastes, as they eat, in the form of carbon dioxide gas. If the larvae produced more carbon dioxide when eating plastic than when eating their regular foods, they might contribute more gas to the atmosphere, the teens worried. So Hayley and Alexander decided to measure the worms’ gas output. To do this, they placed some of the larvae into two airtight containers. The mealworms in one got to dine on Styrofoam. Those in the other got to eat a normal diet of rice cereal. The containers trapped the gas so that the teens could collect a week’s worth.

To their surprise, mealworms eating the plastic produced even less carbon dioxide than did those eating rice. “[This] is definitely a plus” for using mealworms to get rid of plastic, Hayley concludes.

Finally, the teens tested whether or not the mealworms would eat plastic by choice. “If we were to put them in a landfill we want to make sure they chose the polystyrene because that is, you know, their job,” Hayley says. To test that, the young biologists placed mealworms in Petri dishes. Then they added a piece of Styrofoam to one side of each dish and rice cereal to the other. “Eighty percent of the worms chose the polystyrene over their natural food source,” Hayley reports.

The teens then looked to replicate their result — or see if they could produce the same effect twice.  “Science is about replication,” Alexander explains.

This time, they bought mealworms from a commercial supplier instead of relying on the beetle colony in their classroom. And again they found a big surprise: The new larvae refused to eat any Styrofoam!

Puzzled, Haley and Alexander investigated what they might have done differently this time. The worms get most of their water from their food, Alexander notes. So if the air was drier, the food might have become drier and harder to digest.  But the teens showed that a controlled, humid environment didn’t change their findings.

Because mealworms digest plastic with the help of their gut bacteria, Alexander and Hayley wondered whether those microbes were different in the store-bought and lab-reared mealworms. So the teens checked out what the mealworms had been eating.

The teens’ classroom larvae had eaten rice cereal before being moved to plastic. The store-bought larvae instead had been eating wheat bran. This gave Hayley and Alexander more questions to probe. Are the mealworms themselves what was different? Or was it what they ate before they got their plastic dinners that mattered most?

Hayley and Alexander now hope to probe that influence of the mealworms’ early diet and whether that really was what made plastic more appetizing. After all, they want to make sure that when they finally release their worms into a landfill, they will perform as advertised.

The four teens — and three mealworm projects — all managed to find out different things. Katee studied the amount of plastic the larvae can eat. Jason focused on the bacteria in their stomachs. Hayley and Alexander showed that it’s not necessarily the type of worm that matters most. It might instead be where the larvae came from — and possibly what they had been eating.

Mealworms may be able to eat up some of our plastic pollution. But getting them to do so may take a lot more  than relocating just any larvae to a landfill. 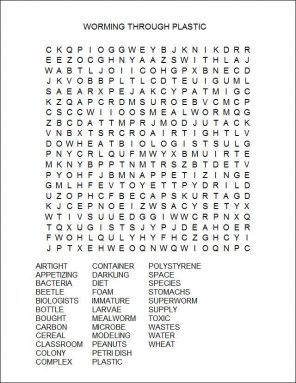