SAN JOSE, Calif. — Telescopic contact lenses might one day zoom with a wink of the eye. It’s one of several emerging technologies that promise to improve, restore or preserve the vision of people with serious eye diseases.

The zoomable lenses are being developed at the Swiss Federal Institute of Technology in Lausanne. They include a tiny telescope that magnifies objects 2.8 times, says Eric Tremblay. This optical engineer is part of a team that is developing the lenses.

Tremblay described a prototype lens on February 13, here, during the annual meeting of the American Association for the Advancement of Science. He was among scientists at the meeting who discussed high-tech solutions for problems due to common eye diseases.

One of them, macular degeneration, is a leading cause of blindness in older adults. It affects the light-sensitive retina at the back of the eye. Gradually, the eye becomes damaged. This causes a slow loss of vision in the center of the eye’s field of view, known as the macula (hence the condition’s name). Over time, a blurred spot at the center of the eye enlarges and darkens.

The new Swiss telescopic lens would, whenever the wearer chooses, make the background of what a person sees appear larger. In that case, any blurred or dark spot would appear relatively smaller in the overall field of view. The lenses don’t have moving parts, like a zoom lens on a camera. Instead, the lenses have some parts that magnify the field of view and others that don’t. The lens wearer controls which parts of the lenses transmit light by using a special pair of glasses.

The glasses and lenses operate together to determine whether the wearer sees a magnified image. To do this, they harness a phenomenon called polarization. (Some types of sunglasses also use this same phenomenon to reduce glare.) The central part of the contact lens is polarized so that only light waves vibrating in a certain direction (up and down, for instance) pass through. A large ring around the rim of the lens, which also magnifies the image the wearer sees, transmits only light that vibrates in a different direction (maybe side to side, for example).

That difference in polarization is key. It lets the lens’ wearer choose to see light from either the center or the rim of the lens, but not both at the same time. That choice is made by winking one eye. (Software in the glasses can tell the difference between a deliberate wink of one eye and an involuntary blink by both eyes.) That wink switches the polarization of the material in the glasses. In one case, the glasses block light that would be transmitted through the center of the lens. Now it transmits light that enters the outer rim of the lens. This magnifies the wearer’s vision. Another wink switches the polarization. Now light that would travel through the outer rim of the lens is blocked. Only light hitting the center of the lens can pass through. So now, the wearer’s vision is unmagnified.

The contact lenses are 1.5 millimeters (0.06 inch) thick. For now, they can be worn only for an hour or so at a time. And that’s because oxygen cannot easily pass through them. The transparent layer forming the front of the eye — the cornea — requires oxygen. Future versions of the lenses may allow oxygen to pass through to the cornea. Or users might rely on eye drops that deliver oxygen directly to an eye’s surface.

Another technology promises a second solution to the problems associated with macular degeneration. Daniel Palanker is a physicist at Stanford University in California. He is helping develop this technology, which requires surgery. It could provide a more permanent (even if partial) improvement in vision, he reports.

The fix consists of tiny implantable devices that fill in for damaged eye cells. One day, doctors may implant a mosaic of these devices in the retina of patients with macular degeneration. Each device would be about 1 millimeter (0.04 inch) wide. That’s only around five times the width of the thickest human hair. Tiny electrical circuits that convert light into electrical current would cover the devices. Nerve cells in the retina would detect the current and then transfer it to the brain. In that way, the circuits would act like the light-sensitive cells that cover an undamaged retina.

Like the telescopic contact lenses, these implanted circuits also would be paired with special glasses. Any visible light streaming through the center of the lenses would pass through unaffected. But more light would be needed because the tiny circuits aren’t as sensitive as the eye’s natural light-gathering cells. To work, they need more light.

To provide this extra illumination, the researchers have mounted a camera onto the glasses. It studies the landscape and converts the light it receives into infrared wavelengths. It then boosts that light and projects it into a wearer’s eyes. (The patient’s remaining healthy cells don’t respond to infrared light. That means this bonus light won’t overwhelm any healthy cells.)

The implants don’t promise perfect vision. About 4,800 of the tiny circuits could fit into a square area of the retina measuring 5 millimeters (0.2 inch) on a side, Palanker’s team estimates. That’s about one-tenth the number of light-gathering cells in a similar-sized area of a healthy retina, Palanker says. That number could restore a patient’s vision to about 20/200. (In other words, that person could correctly read an eye chart at 20 feet that a person with normal vision could read from 200 feet away. Normal vision is 20/20.) If the team can shrink down the size of the circuits by nearly half, then a person’s vision might be restored to 20/120.

The tiny circuits produce different electrical signals than retinal cells are used to, Palanker notes. Still, a patient’s brain would likely learn to interpret them. “It might take a few months, but the brain can learn to merge the data,” he says.

In the future, yet another kind of contact lens might do more than simply change your vision. It could monitor another common eye disease: glaucoma.

In glaucoma, the fluid pressure inside the eye is higher than normal. Left untreated, that pressure can cause permanent damage to the optic nerve. This nerve carries electrical signals from the eye to the brain.

Glaucoma is especially dangerous because it usually causes no pain. As a result, patients may suffer permanent eye damage before realizing they have the disease, explains Giovanni Salvatore. He’s an electrical engineer at ETH Zurich, the Swiss Federal Institute of Technology in Zurich.

Knowing that the pressure in the eye was beginning to build up could alert doctors so that they could take action before damage to the optic nerve occurs.

To get this early warning, Salvatore and his colleagues are developing a pressure gauge. Its electrical circuits would sit on a thin film that would be attached to a hard contact lens. The gauge is designed so that the electrical current flowing through its circuits changes when the film flexes. If pressure in the eyeball increases, the shape of the lens will distort. That, in turn, would cause measurable changes to the current in the gauge.

The gauge needs electricity to work. But the lens also must float loosely on the eye. Salvatore and his team are therefore designing a way to beam electricity wirelessly to the device. Batteries fitted into a transmitter mounted on a set of eyeglasses, for instance, might do the trick.

Right now, the team is fine-tuning its design. Later, the researchers will test it. That means this type of pressure sensor might be years away from reality. Still, it’s worth keeping an eye on this device, along with those being developed by Tremblay and Palanker. All show promise for helping the many millions of people at risk of vision loss from common eye diseases.

battery  A device that can convert chemical energy into electrical energy.

cornea  The transparent front section of the eye. The shape of the cornea allows our eyes bring objects at many distances into focus.

glaucoma  Eye disease that is the equivalent of hypertension: the pressure exerted by fluid inside the eye becomes excessively high. That pressure can damage the nerve carrying vision signals — and, if untreated, lead to partial or total blindness.

infrared light  A type of electromagnetic radiation invisible to the human eye. The name incorporates a Latin term and means “below red.” Infrared light has wavelengths longer than those visible to humans. Other invisible wavelengths include X rays, radio waves and microwaves. It tends to record a heat signature of an object or environment.

involuntary    An action that is not done intentionally.

macular degeneration A form of eye disease in which patients lose the vision in the center of their field of view, or macula, due to damage to the retina. This progressive condition is often age-related, and it is the major cause of blindness in older adults in many regions of the world.

mosaic    a picture or pattern produced by arranging together small pieces of hard material, such as stone, tile, or glass

neuron or nerve cell  Any of the impulse-conducting cells that make up the brain, spinal column and nervous system. These specialized cells transmit information to other neurons in the form of electrical signals.

optical     Having to do with vision or sight, with the fields of optics, or with visible light.

oxygen  A gas that makes up about 21 percent of the atmosphere. All animals and many microorganisms need oxygen to fuel their metabolism.

pressure  Force applied uniformly over a surface, measured as force per unit of area.

prototype    A first or early model of some device, system or product that still needs to be perfected.

retina  A layer at the back of the eyeball containing cells that are sensitive to light and that trigger nerve impulses that travel along the optic nerve to the brain, where a visual image is formed.

sensor  A device that picks up information on physical or chemical conditions — such as temperature, barometric pressure, salinity, humidity, pH, light intensity or radiation — and stores or broadcasts that information. Scientists and engineers often rely on sensors to inform them of conditions that may change over time or that exist far from where a researcher can measure them directly.

technology  The application of scientific knowledge for practical purposes, especially in industry — or the devices, processes and systems that result from those efforts.

telescope    Usually a light-collecting instrument that makes distant objects appear nearer through the use of lenses or a combination of curved mirrors and lenses. Some, however, collect radio emissions (energy from a different portion of the electromagnetic spectrum) through a network of antennas.

20/20 vision  This is the clarity of focus for images 20 feet away that are typical for people with healthy, unimpaired vision. Someone who instead has 20/100 vision sees only as well at 20 feet as people with normal vision would see at 100 feet, or five times farther away. 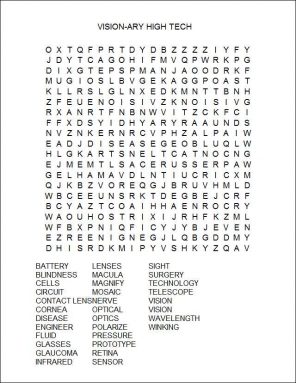