Some 252 million years ago, life on Earth nearly ended. In a geologic flash, at least 70 percent of Earth’s land species vanished along with 96 percent of all species in the oceans.

This was a mass extinction. The biggest ever, it far exceeded the one that snuffed out the dinosaurs some 186 million years later. That one knocked out only 50 percent of Earth’s species. The earlier catastrophe is now known as the Permo-Triassic mass extinction because it occurred as the Permian Period gave way to the Triassic.

Its impacts were so massive that scientists now refer to that time as the Great Dying.

Explainer: How a fossil forms

Details of this period are written in stone. Literally. Details have been emerging from fossils in rocks that developed at this time. Many organisms suddenly disappeared from the fossil record. Marine arthropods called trilobites, for instance, are common in rocks from the Permian. By the time Triassic age rocks developed, all signs of these critters had vanished.

What caused the Great Dying has long been a mystery. Many scientists suspected that a massive volcanic eruption had something to do with it. Occurring in what is a part of Russia now known as Siberia, this eruption lasted millennia. But there was little hard evidence linking that eruption to the extinctions. So the biggest wipe-out in the history of life remained a cold case.

Scientists have new evidence placing blame solidly on the Siberian eruptions. They triggered deadly conditions on both land and in the seas. And new analyses of them could offer important lessons about how to interpret changes occurring on Earth today.

During the Permian, nearly all of Earth’s landmasses had clumped into one mega-continent. It’s name: Pangaea (Pan-JEE-uh). Earth had one main ocean and one smaller sea. Pangaea’s enormous size altered the planet’s climate. Most places became warm and dry.

This Permian world teemed with life. On land, insects buzzed and crawled, including primitive dragonflies and cockroaches. Big, plant-eating reptiles and amphibians grazed its forests. The oceans were ruled by fish. Coral reefs thrived. Trilobites scuttled along the seafloor.

Then, at the end of this lush period, volcanoes began to erupt. And erupt. And then erupt even more — spewing what would seem a never-ending cascade of lava over a period of 60,000 years. The most massive in Earth’s history, the eruptions poured out enough lava to cover the entire continental United States to a depth of nearly 1.6 kilometers (a mile)!

Very big volcanic eruptions can mess with life in several ways. First, they shoot clouds of ash high into the atmosphere. That can block out a lot of sunlight. The eruptions also may add heat to the oceans and atmosphere. This would warm surface temperatures across the globe, along the way altering weather patterns. Eruptions pump out gases, especially carbon dioxide. As a greenhouse gas, carbon dioxide keeps heat from escaping away into space. This too warms the climate. The oceans, too, will absorb plenty of carbon, leaving the water ever more acidic.

The huge eruption of the Siberian volcanoes and the Permo-Triassic mass extinction occurred at just about the same time. Coincidence … or not? That has been a big — and lingering — question.

To find out if the Siberian volcanoes could have caused the Great Dying required knowing very precisely when each event occurred. Enter geochronologist Seth Burgess. He knew that if those eruptions occurred just after the extinction, for example, they could not be blamed.

Geochronologists (JEE-oh-kron-ol-uh-jizts) specialize in determining how old a rock is. As a PhD student at the Massachusetts Institute of Technology (MIT), he led a team that analyzed rocks from China. These had formed during the late Permian. These scientists wanted to know what ancients rocks could tell them about the timing of those Siberian volcanoes.

The Chinese rocks contained layers of limestone. Such sedimentary rocks are created in chronological order, with the youngest at the top. In the lowest limestone layers, the scientists found fossils of animals that lived in the Permian. But those fossils were missing in more recent Permian layers. So the Great Dying had to have occurred somewhere in between.

By looking at two constituents of the limestone — carbon and zircon — Burgess and his team were able to come up with a timeline of the Siberian eruptions. The fossils, they found, had disappeared within an interval of 60,000 years. In the last 10,000 years, though, there was a sudden pulse of volcanically derived carbon.

Concludes Burgess: “It looked like business as usual until all of a sudden, everything changed.” His team published its findings in the February 10, 2014, Proceedings of the National Academy of Sciences.

Acidity on the rise

But how did that carbon change the world? One group of scientists was curious about why ocean pH changed as it had during those 60,000 years. They especially wanted to know if something unusual had happened to the pH during those last 10,000 years. Might it be linked to the extra carbon that Burgess and his team had found?

To explore the mystery, Matthew Clarkson led a research team that travelled to the United Arab Emirates. It’s a tiny country in the Middle East. A geochemist, Clarkson was at the University of Edinburgh in Scotland when he conducted that work in 2014. His team found limestone rocks that once were at the bottom of an ancient Permian ocean. Those rocks provide a record of ocean conditions back then.

To learn how pH had changed, the group tracked differences in the rocks’ amounts of two forms of boron, an element that came from the seawater of that Permian ocean.

“Boron is found in seawater in two different forms, boric acid and borate,” explains Clarkson. “The amount of each in the ocean is dependent on the pH of the water.” By determining the ratio — or relative amounts — of borate and boric acid in the limestone, researchers can calculate what would have been the pH of ocean water when the rock was forming.

Clarkson’s team plotted the ratio of the two forms of boron in the limestone layers. Sure enough, they could see a pattern in the pH values. Just at the Permian-Triassic boundary, there was a fast, dramatic drop in pH. That meant the water had become more acidic.

“We see a change in boron,” Clarkson says, “that corresponds to about 0.6 pH units.” His team compared those data to Burgess’s precise carbon ages from Chinese rocks of the same age. They discovered that this big shift towards more acidic oceans occurred during the same 10,000 years as the shift in amounts of volcanic carbon.

But that wasn’t the end of it. The first 50,000 years of eruptions in Siberia would have released enough carbon dioxide to have substantially warmed the planet’s surface. Many land animals might not have been able to easily adapt to the evolving conditions. In addition, species losses would have stressed ecosystems far and wide, concludes Clarkson, now at the University of Otago in Dunedin, New Zealand. And reduced oxygen from those 50,000 years of eruptions might have further weakened many species, he says.

From his data and Burgess’s, it appears that a second and devastating phase of eruptions happened in the last 10,000 years. The final phase of those eruptions, says Burgess, delivered more carbon dioxide than would normal ones.

“Something added more carbon dioxide,” he says. One possibility: The Siberian volcanoes began erupting through a layer of limestone. That eruption likely would have been so hot that the limestone melted. This would have released the carbon it contained, adding to the gases being spewed directly by the eruptions.

The extra boost of carbon dioxide seems to have provided the final, knock-out punch for ocean creatures, Clarkson suspects.

Much of that carbon dioxide dissolved into the oceans’ water. That would have caused a sharp and rapid drop in pH. The more acidic water would have dissolved the calcium-based mineral that makes up sea shells. It also would have made it harder for creatures to build new shells. The process of using calcium to create shells is called calcification.

“Some of the organisms that rely on calcification to create shells would have suffered particularly badly,” says Clarkson. Fossils show that the creatures that went extinct in the highest numbers were the ones that depended the most on shells, he notes. In those last 10,000 years, many species that had survived the first phase of volcanic eruptions were finally done in.

The boron data “provide the most direct look yet at how ocean pH may have changed during the Permian-Triassic boundary interval,” notes Jonathan Payne. He is a geologist at Stanford University in California. An expert in how ancient life and the environment are connected, he was not involved in the study.

There is also an indirect link to extinctions on land, he argues. The same increase in carbon dioxide that caused the ocean to become more acidic might also have sparked major ecological damage on land. A global warming and changes in rainfall or snows would likely have wiped out many remaining land-based organisms, Payne suspects.

After the Great Dying, Earth slowly came back to life. After all, there were a few survivors. They became the ancestors of many new plants and animals, including the dinosaurs. The Great Dying cleared the way for some seriously successful newcomers.

Among them would be people. But to remain a successful species, people should heed lessons from that ancient period, the scientists now argue. After all, don’t  climate change and ocean acidification sound eerily familiar? They are happening again, right now.

Just as during the Permo-Triassic extinction, today’s changes are caused by extra carbon dioxide in the atmosphere. Only this time, much of the carbon dioxide is coming not from Siberian volcanoes but from people burning carbon-rich fossil fuels.

Clarkson says that in the early 1800s, Earth’s oceans had a pH of 8.2. Since then, human activities have pumped lots of carbon dioxide into the atmosphere. Ocean pH has already fallen to 8.1. “It’s projected to fall another 0.3 to 0.4 pH units by the end of this century. That’s 0.3 to 0.4 in 300 years,” he says. That’s enough to cause serious damage to animals that depend on building shells, and to predators that eat those animals.

At that rate, by the year 2400, the oceans may become acidified by the same amount seen in the Great Dying — when nearly every living species on Earth went extinct.

Correction (10/28/15): An earlier mention of placoderms has been removed to reflect the general consensus that this fish had likely gone extinct prior to the Permian period. 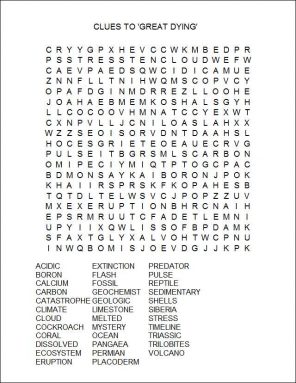