You have probably heard this old saying. It isn’t just folk wisdom, however. It’s chemistry. Another common expression — like water off of a duck’s back — illustrates the same basic principle. The oil on a duck’s feathers repels water and prevents the bird from getting soaked in the rain. Naturally oily feathers also help keep a bird dry as it swims.

Chemistry is just one way to repel water in nature. Structure, or the shape of things, is another. To excel at water repellency, the lotus leaf relies on both.

Unlike water lilies, the lotus holds its leaves and flowers high above a pond’s surface. Still, each lotus is amply prepared to fend off a drenching. The waxy surface of the leaves helps repel water chemically. But very tiny surface bumps also afford each leaf physical protection. The closely spaced bumps are far smaller than the width of most water droplets. Together, these bumps hold water droplets above a leaf’s surface, so that raindrops just bead up on top of them. You might picture this as something like a person resting on a bed of tightly spaced nails.

“The leaf of the lotus is one of nature’s most water-repellent surfaces,” notes Anish Tuteja at the University of Michigan in Ann Arbor. And he says, “There’s a lot we can learn from nature.” He should know. As a materials scientist, he studies how the structure, composition and other aspects of a material affect its properties.

By mimicking processes and structures seen in nature, but using materials created by people, he and others are developing a new world of super-repellent surfaces. Scientists call such surfaces omniphobic. This term combines the Latin word for everything (omni) with the Greek word for fear (phobia). If something is omniphobic, it “fears everything.” And that describes pretty well a surface that repels all sorts of liquids, including water and oil.

Oil is a special challenge. No surface naturally repels it. That’s why oil spills can be deadly for ducks and other waterfowl. If a duck’s feathers become oil-soaked, they quickly mat. This limits the bird’s ability to swim and keep warm.

Researchers are now surpassing nature by developing oil-repellent surfaces. Some also have created surfaces that repel oil but attract water. The latter example would be useful in collecting the oil that forms slicks on the ocean’s surface after a spill. And on the drawing board for some engineers: truly omniphobic surfaces. They might help ships travel faster, using less fuel. Or they could keep windshields and glasses from fogging up.

Here we profile three scientists who are developing super-repellent surfaces. All have found inspiration in the living world.

Tuteja has made many different types of omniphobic surfaces. Recently, he and his coworkers started with a small mesh made of thin, stainless steel wires. It resembled the screen used to protect doors and windows but was woven much more tightly. A swatch of mesh the size of an adult’s thumbnail would have more than 1,200 tiny square openings.

The Michigan scientists then sprayed a coating of tiny, chemical-repelling fibers onto the mesh. Even though the coating was very thin, it was riddled with pockets of air, because the fibers didn’t pack together tightly. Any liquid that touched the treated surface barely touched anything solid. In that way, it was just like a lotus leaf. By combining both chemical and physical guards for the mesh, it can now repel dozens of liquids, from coffee to sulfuric acid.

Spill just about any liquid onto the mesh and it will neither splat nor spread out. The drops simply bounce off. Tuteja’s team described its new treatments Dec. 23, 2012, in the Journal of the American Chemical Society.

Such a super-repellent fabric could make stain-free clothing that keeps people not just clean but also safe. Chemists or doctors could wear laboratory coats made from the mesh when working with acids, blood or any other potentially dangerous liquids. In the case of a spill, the liquid would bounce off the cloth instead of soaking into it.

The Michigan researchers also recently developed a fabric that helps separate oil from water. It might aid in removing spilled oil from lakes, rivers or oceans. The experts again started with the same type of stainless steel mesh. Then they applied a special chemical coating that not only repels oil but also attracts water.

This new type of filter requires no pump to operate, just gravity. Pour oil and water over the mesh and only the water passes through, Tuteja explains. Any oil simply beads up on its surface, from which it can be skimmed off. In laboratory tests, such a fabric removed more than 99 percent of the oil from a sample of fouled water. The researchers reported their success in August 2012 in the scientific journal Nature Communications.

Surfaces that display a mix of behaviors can serve many purposes, says Michael Rubner. He’s a materials scientist at the Massachusetts Institute of Technology (MIT) in Cambridge. One advantage of such surfaces that most people would appreciate: mirrors or other glass surfaces that resist fogging up. Fogging occurs when warm, humid air hits a camera lens, mirror or other cool surface. Water quickly condenses from the air and onto the surface. This forms droplets that scatter light, creating a foggy opaqueness.

Many researchers have tried to minimize fogging by designing surfaces that attract water droplets. Why? Super attractive surfaces should cause droplets to spread out evenly, forming a thin layer. Light scattering is minimized when that thin sheet of water is the same thickness everywhere, explains Rubner. Unless temperatures are below freezing. Then water atop the surface can freeze into a blanket of frost, which is an even worse problem. So scientists haven’t had complete success with this approach.

The MIT group took a different approach. Its new multilayered surface attracts water vapor but repels water droplets. Moisture in the air passes through the outer layer. Once inside, it temporarily attaches to a humidity-capturing inner layer. Material in this layer grabs onto water molecules one at a time — not as a group. That keeps the individual gas molecules from combining and freezing. At the same time, the outermost layer of this special coating repels liquid water. Raindrops or any other large droplets that fall on this surface just roll right off.

To test the surface, Rubner’s team chilled small plates of glass for an hour at –20° Celsius (–4° Fahrenheit). Some of the glass had been given the new coating. They left the rest untreated. Afterward, the scientists brought the glass into a warm, humid environment. The uncoated glass quickly fogged up and then frosted over. Glass wearing the new coating remained clear. The team described its success online Jan. 29, 2013, in the scientific journal ACS Nano.

The fog-fighting coating has at least one drawback: It is very thin and easily damaged, notes Rubner. So it may not work for the outside surface of a car’s windshield, where wipers or weather could damage it. But the scientist believes it could perform well on the inside of a windshield or on the lens of a camera or telescope.

When it comes to super-repellent coatings, some researchers are thinking big — as in ships. Big vessels require a lot of energy to overcome friction, known as “drag,” as they plow through water. Much of that drag comes from watery swirls, called vortices. These form as water flows past a ship’s hull. If scientists could reduce this turbulence, ships could move faster, burn less fuel — or both.

One way to lower friction would be to make a layer of air stick to a ship’s hull below the waterline, explains Charlotte Barbier. She’s a mechanical engineer at Oak Ridge National Laboratory in Tennessee. With such an air jacket, Barbier says, “The ship thinks it’s moving through air rather than through water.”

Her team designed a surface to physically trap air. Then they gave it a chemical coating that repels water. In that way, the result resembled some of the super-repellent surfaces that others researchers have developed.

The Oak Ridge group tested its two-pronged approach on small disks of aluminum.

First, they carved tiny grooves into the disks. (On a large ship, such grooves would help steer the water as it moved past the hull, helping it to flow smoothly. This would reduce drag.) Then, the team used acid to etch even smaller structures between and inside the surface grooves. Think of them like tiny pores in the skin on your face. By repeatedly dipping the metal in acid, the pores grew wider. Eventually, each pore nearly overlapped its neighbor. All that was left were tiny, needlelike bits of aluminum separating each pore.

Now the team coated the entire pockmarked surface with a super-repellent polymer. (Polymers are substances made of a large number of repeated chemical units. Think of them as extremely small but very long chains of the same chemical building blocks.)

The team tested their sample disks underwater. Using a device like a superfast record player, it spun these disks at very high speed. (It was easier to make measurements in a lab that way, instead of towing the pieces of metal through a pool of water.) As predicted, the surface treatments reduced drag. Some combinations of groove depth and pore size worked better than others, however, depending on the speed.

These data suggest that by making a surface more slippery, these treatments should be able to cut the drag by 44 percent on an oil tanker that was 300 meters (984 feet) long, says Barbier. Her group described its results last November at an international meeting of mechanical engineers in Houston, Texas.

Other researchers are studying how super-repellent coatings might help solve all sorts of problems. For instance, the coatings could reduce the amount of ice that builds up on power lines during winter storms. The coatings could also reduce algae that grow on ship hulls — another big source of drag. Add in other potential applications, from stain-resistant clothing to fog-free camera lenses, and it is obvious why the idea of super-repellent surfaces is becoming super-attractive to so many industries.

drag A retarding, or delaying, force exerted by a fluid surrounding a moving object.

materials scientist A scientist who studies how the structure, composition and other properties of a material can be used to create or improve products and processes.

mechanical engineer  Someone who uses physics and materials science to design, develop, build and test mechanical devices, including tools, engines and machines.

omniphobic surface A surface that repels all types of liquids. Omniphobia combines, respectively, the Latin word for everything and the Greek word for fear.

polymer A substance made of a series of repeated chemical units. 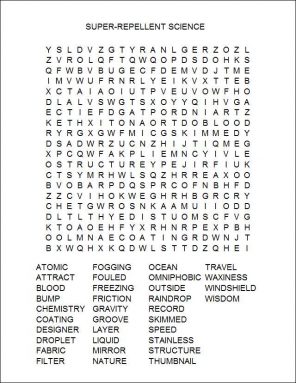