A Burmese python is scary enough to be featured in a horror flick. Adults can be more than 4.8 meters (16 feet) long. In the Florida Everglades, these snakes have swallowed mammals as large as deer and alligators. Yet spotting a python in the wild has been proving hard.

Scientists describe these snakes as cryptic, meaning they can hide in plain sight.

“It is very difficult to visually detect them,” says Margaret Hunter. She’s a geneticist with the U.S. Geological Survey (USGS) in Gainesville, Fla. The giant snake’s scales have a pattern that blends in with tall swamp grasses. The snakes also are sneaky. They often hide so they can ambush prey. That behavior is an advantage in the snake’s native habitat of Southeast Asia. But it causes havoc in the Florida Everglades. There, Burmese pythons have become an invasive species.

Most likely, people bought some snakes as pets and later released them into the Everglades. Or pet snakes might have escaped into the swamp. Whatever their source, these snakes found a great home there and soon multiplied. And then multiplied some more. A lot more. Today, an estimated 30,000 to 80,000 live in the wilds of Florida. Nobody knows precisely how many because they’re so hard to see.

But those reptiles have been doing plenty of damage. After preying on mammals and birds, numbers of both groups in the Everglades are way down. “Because [the snakes are] so harmful to the environment, we need to be able to manage them,” says Hunter. But, she adds, that’s hard to do without good information about where the snakes are.

With a new method called environmental DNA — or eDNA — scientists can learn where a species is without laying an eye on one. This method detects genetic material left behind by these snakes and every other species. This genetic debris can identify all of the species that call an area home without someone spying them.

Environmental DNA is letting scientists find species faster and more accurately than ever. And it might even point to species no one has yet recorded seeing.

DNA is the genetic material found in the cells of all living organisms. It looks like a long, twisting ladder. Each rung on that ladder is a pair of chemicals called nucleotides. There are four of these chemicals: adenine, thymine, cytosine and guanine. Scientists refer to them as A, T, C and G for short. Each nucleotide on one long side of the ladder must pair with a specific one on the other side. A’s only pair with T’s. Any C’s must pair with G’s.

Humans have about 3 billion rungs, or base pairs, in their DNA. Other species have more or fewer. The order of base pairs in every individual’s DNA is unique, but their’s will be very similar to other members of its species. Scientists can use that code to identify a species.

Ryan Kelly is an ecologist with the University of Washington at Seattle. He also works at the Center for Ocean Solutions at Stanford University in Palo Alto, Calif. “Traces of DNA are left behind by every species everywhere,” he says. Scratch an itch, and you shed skin cells containing your DNA. Pets and other animals leave behind bits of dead skin known as dander. Reptiles shed skin as they grow. There’s even DNA in poop.

“Just like forensic scientists do at a crime scene every day, we are detecting that trail of DNA that’s left behind,” explains David Lodge. He’s a biologist at the University of Notre Dame in South Bend, Ind.

Scientists are prowling for eDNA throughout the environment — in water, soil, even ice cores. Lodge’s group starts with water. It may come from a lake, a river or some other wet area.

Researchers in the lab then pour that sample through a filter that catches cells and other particles. The filter then goes into a liquid with hard-working chemicals. One chemical in the mix breaks down cell walls to release the DNA. Another chemical grabs onto proteins and other materials that are not DNA. A machine then spins the mix at high speed. DNA-filled liquid floats to the top. Everything else sinks to the bottom. More steps get rid of extra liquid from that top layer.

Additional work might be needed along the way to “clean up” samples even more, Hunter says. For example, her lab had to remove certain compounds produced by trees in the area. Those compounds could have stopped reactions that take place in the next set of steps in her search for python eDNA.

In projects focused on a particular species, those next steps search through the sample for a particular span of rungs from the DNA’s ladder-like structure. This specific sequence of DNA is unique to its species. If it’s found, the method will then make many, many copies of that DNA fragment. This copying process is called the polymerase (puh-LIM-er-ase) chain reaction, or PCR. In effect, it works like a photocopier for DNA.

Using PCR boosts that DNA signal, explains Eva Egelyng Sigsgaard. She’s a biologist with the Natural History Museum of Denmark in Copenhagen. Think of turning up the volume on your cell phone. After you amplify the sound, you can hear the ring over any background noise in the room. “When we amplify the DNA, we make large amounts of the specific DNA that we’re looking for,” Sigsgaard says. Doing that makes that DNA stand out against the “noise” of other species’ genetic debris.

Hunter at USGS tailored her work to find and copy a part of the Burmese python’s DNA that is different from that in all other species. That let her team show for the first time that the big snakes could be detected through eDNA. They described their success in PLOS ONE on April 15, 2015. If eDNA sampling becomes more routine, it could help Florida researchers track the snakes quickly and at relatively low cost.

Fishing expeditions often try to catch whatever is near. But homing in on one particular type of fish isn’t always easy. That’s especially true when a lake or other water body is large, and the desired fish is not common. Again, here’s where eDNA can help.

In recent decades, bighead and other Asian carp species have been  found  in many American waters. They already have spread through much of the Mississippi River region.  Scientists hope to keep them out of the Great Lakes.

Like Burmese pythons, Asian carps are invasive species. Native to China, each bighead carp can weigh as much as 40 kilograms (88 pounds) and grow to 1.4 meters (4.6 feet). The fish eat huge amounts of not only algae, but also tiny animals and fish eggs. As a result, these invaders can quickly deprive other species of the food they need.

Scientists want to know as soon as signs emerge that the invasive carp is spreading further, says Lodge. In the past, researchers would have tried to catch fish with nets or using equipment that stuns them with an electric shock. But those methods didn’t always catch potentially harmful invaders such as the bighead carp. Also, nets and electric shocks could harm native fish. With eDNA, though, scientists can search for invasive carp without ever touching a fish. Indeed, eDNA has now become an important tool for water managers worried about the carp.

“Another advantage of the eDNA approach is because you’re not capturing the organism, there’s much less of a risk that you’re going to harm it,” Locke adds. “We may not care about harming Asian carp, but we do care about harming threatened and endangered organisms.” So, scientists can search for Asian carp with little risk of hurting native species.

Indeed, that advantage makes eDNA a great tool for hunting rare and endangered species. Sigsgaard used the process to find and copy a unique part of the DNA of the European weather loach. This freshwater fish got its name because it swims to the surface when the air pressure changes. (People who witness that behavior thus come to expect a change in the weather.)

Before Sigsgaard’s study, scientists thought the eel-like fish had vanished from all but one location in Denmark. But with eDNA, she found evidence of the rare fish in samples from two places. She and her colleagues reported the finding in the March 2015 issue of  Biological Conservation .

Sigsgaard’s eDNA work took less time than earlier fishing surveys. Better still, she says, “We don’t disturb the animals at all or the ecosystem.” That’s important because she and other scientists want to protect the rare fish. And now her research shows just where that protection is needed.

Environmental DNA can detect more than one species at a time. In fact, it can also tell scientists about whole groups — or even all the species — in an area.

Before eDNA technology, surveys to find species often took months to years. Now eDNA can provide answers quickly. Search results scouting for just one species from a single sample may come back within a few days, reports Hunter. Results of surveys for multiple species take longer, but still might be back within weeks, says Kelly. In both cases, people can act sooner if results show that a species or habitat needs protecting.

“What you’re getting is pretty much a real-time sample of the environment,” at least in seawater, says Kelly. That’s because DNA does not stick around forever. It degrades, or breaks down — often within a few weeks or months.

In one project, scientists sampled water off of the California coast. Sea otters depend on kelp forests, and their DNA was found there — but not elsewhere. Dolphin DNA was found offshore but not in kelp forests. If DNA lasted for years, water currents would have carried it much farther, Kelly says. The scientists would have found their DNA in places where the animals don’t live.

How fast eDNA breaks down can differ with the species. Some also shed DNA at different rates. And various features of the environment can affect the shedding rate. One project at Notre Dame is measuring DNA as it flows through an experimental ecosystem at a local county park. Researchers can change conditions in the system and see whether this affects the amount of eDNA.

One other big challenge is that eDNA can’t yet say how many individuals are present. It can only tell if at least one member of its species is present. And the results don’t say if that DNA came from a few animals nearby or many animals inhabiting a large area. Scientists hope future improvements might resolve such details. Then they could see if the size of a population is growing or shrinking.

Even now, though, the technology is already “an amazingly powerful tool” for research, says Michael Pfrender. He’s a geneticist at Notre Dame. “I think we’re just starting to appreciate how powerful this really is.”

“Everything we know about the world depends on people going out and counting things or finding things,” adds Kelly. Environmental DNA “allows us to do that in a way that’s potentially much better and much faster and much cheaper.” 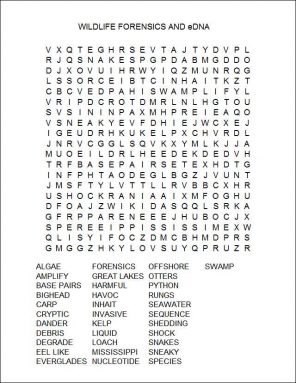 Read another version of this article at Science News