Even if trees cannot walk, they are still on the move.

In parts of the Arctic, entire forests are creeping northward. Luckily, ecologist Serge Payette is hot on their trail. Like the two other scientists we will meet here, Payette has spent decades trying to understand the often surprising ways plants influence their environment.

Together, these three experts are showing how plants don’t just colonize new surroundings, but also can warm and clean them. Some plants can even rid an area of any competing plants, using chemicals that continue to marvel scientists. As work by these scientists shows, plants do many things to interact with their environment — and ours.

Across the Arctic, temperatures are rising faster than anywhere else in the world. As that happens, the tree line that marks where forests stop and the treeless tundra starts has been shifting northward. Payette is an Arctic plant ecologist who works at Université Laval in Québec, Canada. And he’s been studying how trees respond to this climate change in northern Canada.

Trees growing along the tree line must protect themselves from the cold wind. His research has shown that to do this, plants tend to grow horizontal limbs low to the ground. The energy it takes for trees to grow this way means they don’t have enough left over to make seeds.

But as Earth’s climate has been warming, trees no longer have to just grow horizontally. Many can instead grow up, toward the sky. This takes less energy. And with all that leftover energy, these trees have started producing more seeds. Payette has seen this happening especially in places where white spruce grow, such as northern Québec and Labrador.

“White spruce, which is a North American tree, is quite able to produce a lot of seeds, which can move long distances in the wind,” explains Payette. When windblown seeds end up on the tundra beyond the tree line, they eventually can sprout new trees. This explains how a forest can move.

Of course, the process would work only if the tundra was warm enough. But in recent years, the whole planet has been warming — including the tundra.

Seeds also drop to the ground in the sparse forests already growing below the tree line. But no matter whether trees sprout in new locations below or above the tree line, they trigger two important things that can warm snowy surroundings even more.

First, the new trees will shield some snow, keeping the sun’s rays from reflecting off of the white surface. Instead, the trees’ dark green needles absorb the sun’s heat. This warms them and the surrounding air. The extra warmth encourages even more trees to produce seeds. That further boosts a forest’s ability to expand.

Second, more trees will trap more snow, preventing much of it from blowing away. While snow is cold, it also acts an insulator. Like a blanket, snow can trap heat in the soil below. Warming the soil also encourages tree growth.

In northern Québec and Labrador, temperatures have risen 2 degrees Celsius (3.6 degrees Fahrenheit) since the mid-1990s. That rise has helped more trees grow past the tree line. And the more trees that grow, the warmer that region has become.

“The cold landscape that we are accustomed to in northern Canada will be a thing of the past,” Payette predicts.

The speed at which trees are moving north is “not well-settled,” he notes. But Payette says they are moving faster in North America than anywhere else. That’s because trees that grow in other parts of the far northern hemisphere, such as birch in Scandinavia, are not as quick to produce seeds as are North America’s white spruce.

Of course, warmer temperatures are bringing other changes to the far North too. Payette worries about impacts on the people and wildlife that depend on frozen conditions for food and shelter.

Right now, Payette also can’t think of a job he’d rather do. “I’m very lucky,” he says. “I’m doing something I love.”

Indoors with the outdoors

Environmental scientist Bill Wolverton loves his work too. In fact, he surrounds himself with it day and night. Wolverton’s Picayune, Miss., home — including his home office — is chock-full of plants.

His houseplants include rubber plants, snake plants, yucca plants, golden pothos and peace lilies. These common plants do some uncommon good: They cleanse the air of harmful chemicals. It’s a benefit Wolverton has spent most of his career studying.

He got his start in the 1980s, working for the National Aeronautics and Space Administration (NASA). NASA had worried that astronauts might spend months living in stuffy spacecraft. So it asked Wolverton to figure out if plants could make the air healthier for astronauts (and the rest of us) to breathe.

Scientists had long known plants can clean the air. Wolverton went a step further. He tested common houseplants to see which do it best. He also investigated how plants do it.

Wolverton focused on three common air pollutants: formaldehyde, benzene and trichloroethylene. Carpets, furniture and computers are among the many household products that can emit these chemicals. Their levels can be two to five times higher indoors than outdoors. And that can be concerning because people spend as much as 90 percent of their time indoors.

These pollutants can cause breathing problems, headaches and fatigue. Research suggests that some of these chemicals might even cause cancer. Luckily, bringing a touch of the outdoors indoors can help.

Houseplant leaves absorb certain chemicals, including the common contaminants Wolverton chose to study. What’s more, the leaves broke these pollutants down into harmless compounds. Plants with the biggest leaves proved best at this type of cleaning.

But plants also remove pollutants from the air as they transpire water — that is, exhale water from their leaves, he found. To do this, plants must first haul water up from their roots. In the process, air gets pulled down to the roots and soil. Any pollutants in the air will get sucked down there too. Once in the soil, these pollutants can be broken down into harmless substances by microbes.

Leaves that moved water most effectively cleaned air the best, Wolverton found — “such as the palms, golden pothos, rubber plants and the peace lily.”  For a standard-sized bedroom, he recommends growing at least two such plants, each about 30 to 60 centimeters (12 to 24 inches) high.

Though Wolverton is retired from NASA, he now runs a company that relies on the natural ability of plants to treat indoor air. He is also working on ways to make the process more efficient. This might include adding fans and replacing potting soil with special substances that boost plant growth.

While some plants can break down harmful chemicals, others make them. These plants produce poisons to keep other plant species from invading their territory. This phenomenon is called allelopathy (ah LEE loh path ee).

Think of plants as chemical factories, he says. Some plants make chemicals to help themselves. The sweet scent of a rose? The mix of chemicals responsible for that aroma aids in reproduction. Other plants make chemicals to poison other plants. Walnut, pecan and hickory trees, for instance, all make a compound called juglone. Juglone can trigger other plant species to wilt and die. In fact, people sometimes use juglone as a natural weed killer.

Jez studies the proteins that control the amount of certain chemicals that plants make. In particular, he studies the shape of those proteins. It turns out that a protein’s shape can affect whether a plant makes a lot of some protective chemical, a little, or none at all.

To view a protein’s shape, Jez has to turn the material into a crystal.  He then uses X-rays to probe the arrangement of its atoms. This creates a picture of the protein’s structure in three dimensions.

Better understanding the shape of these proteins should offer clues to how they control chemicals.

“I try to understand nature’s machinery and how it makes proteins,” Jez says. “We’re still at the very early stages, but if we can figure that out, we might be able to control it.” Some researchers are studying how to build useful proteins in the test tube. Others are trying to understand how to help plants boost their production of these proteins.

For example, certain crops, such as sorghum and rice, naturally produce chemicals to fight off invading species. To a farmer, those potential invaders are weeds. Not all sorghum and rice plants can do this, however.

Understanding how certain varieties of important crops protect themselves by staging chemical warfare against invading species can help plant breeders. They can use what they learn to create new crop plants that more effectively fight weeds with little help from weed-killing chemical sprays.

Of course, plants also make chemicals for gentler purposes, such as attracting pollinators.

Pollinators, such as bees, carry powdery grains from one flower to another. When pollinators land on a flower, they drop some of those grains, called pollen. Pollen fertilizes the plant so that it can reproduce.

The lemon tree provides a good example of a plant that makes a chemical to attract pollinators. The limonene it makes has a lemony scent that pollinators — and people — like.

Limonene represents a gentler form of chemical warfare, says Jez. That’s because the lemon tree is not trying to kill nearby plants. The tree instead is trying to ensure that it attracts more than its fair share of pollinators.

“It’s about outcompeting the others,” he explains.

The ability of plants to make chemicals fascinates Jez. However, what really thrills him is successfully turning some plant protein into a crystal. When he succeeds (and often it isn’t easy), he can become the first person to ever witness the protein’s structure — its skeleton.

Many more discoveries await Jez, as well as Payette, Wolverton and others. And they keep probing because they have a deep curiosity about how plants alter their environment. What they learn might ultimately help people speed those changes — or slow them down.

allelopathy A plant’s production of chemicals that impair the growth and survival of other plant species.

climate change Long-term, significant change in the climate of Earth. It can happen naturally or in response to human activities, including the burning of fossil fuels and clearing of forests.

ecologist A biologist who studies the relationships among living things and their environment.

transpiration A process in which plants carry moisture from their roots to their leaves, where it is then lost to the atmosphere as vapor.

tundra A large, treeless region in the far northern hemisphere where the subsoil is permanently frozen. 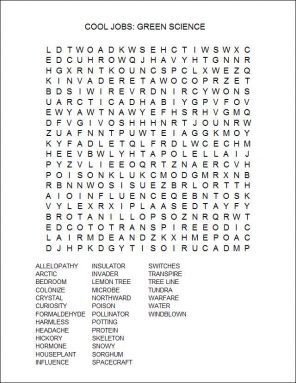