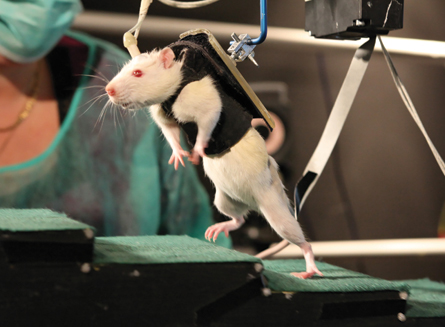 With the right treatment and training, paralyzed rats with damaged spinal cords could walk again, a new study shows. The animals even regained the ability to climb stairs and move around obstacles.

Many people lose the ability to move parts of the body after suffering a serious spinal cord injury. For example, actor Christopher Reeve, who played Superman in the movies, was paralyzed after damaging his spinal cord in a horseback-riding accident.

Of course, rats aren’t humans. But the new research suggests that people might benefit from treatments similar to those the rodents received.

“The really exciting thing, the take-home message for people living with spinal cord injuries, is that this represents yet another step towards real treatment,” neurologist John McDonald told Science News. McDonald studies the nervous system — a network of cells, including those in the brain and spinal cord, that transmit signals throughout the body. He works at the Kennedy Krieger Institute and the Johns Hopkins University School of Medicine in Baltimore.

The spinal cord is a long column of nerves that stretches from the brain down the back. Nerves carry signals between the brain and other parts of the body, such as the arms and legs. Damage to the spinal cord may interrupt those signals.

Swiss scientists tried a set of treatments on rats with spinal cord injuries that had paralyzed the animals’ hind legs. These researchers gave the rats a mixture of drugs and electrical shocks to activate nerve cells. Then the team placed each rat in a harness that held up the animal on its rear legs. To encourage the rats to walk, the researchers put cheese and chocolate in front of the animals.

After a few weeks, the rats started taking steps. Eventually, they could also run, navigate around obstacles and climb stairs.

Offering treats to coax the rats to exercise was an important part of the training regimen, the study suggests. Another set of rats also got drugs and electrical shocks. The researchers put no treats in front of this second set of animals. When placed on a treadmill, the rats could take some steps. But they never regained the ability to walk on their own, as the first group had.

The researchers also studied how these therapies affected the rats’ nervous systems. In rats that learned to walk toward the treats, nerve fibers grew between the brain and spinal cord. The part of the rats’ brains that controlled walking also changed. None of these changes developed in the brains of rats that walked only on the treadmill and weren’t tempted with treats.

The rats that learned to walk and run toward the treats didn’t recover completely. Walking on four legs without the harness, these animals had trouble keeping their balance. And the training regimen may not restore all types of movement. For example, people might need different treatments to learn to keep their balance or precisely control the movement of hands and fingers.

spinal cord A long column of nerve tissue down the back that carries signals between the brain and other parts of the body.

nerve A fiber or set of fibers that carries signals between the brain and other parts of the body.

nervous system A network of cells, including those in the brain and spinal cord, that transmit signals throughout the body.